Sanjay Dutt and Maanayata jet off to Dubai to meet their kids, see photos

New Delhi| Jagran Entertainment Desk: Actor Sanjay Dutt and wife Maanayata Dutt on Wednesday flew to Dubai to meet their children. The Sadak 2 actor's wife Maanayata Dutt shared the photo on her Instagram account with actor Sanjay Dutt in a private jet. The couple looked all smiles in the photo and seemed to be happy while heading for a getaway with their children Shahraan and Iqra.

Maanayata Dutt shared the photo and wrote, "En route life." In the photo, Sanjay was wearing a blue full-sleeved T-Shirt and blue jeans. He was spotted in a clean shave look and on the other hand, wife Maanayata was carrying black floral printed top with round-framed black sunglasses. 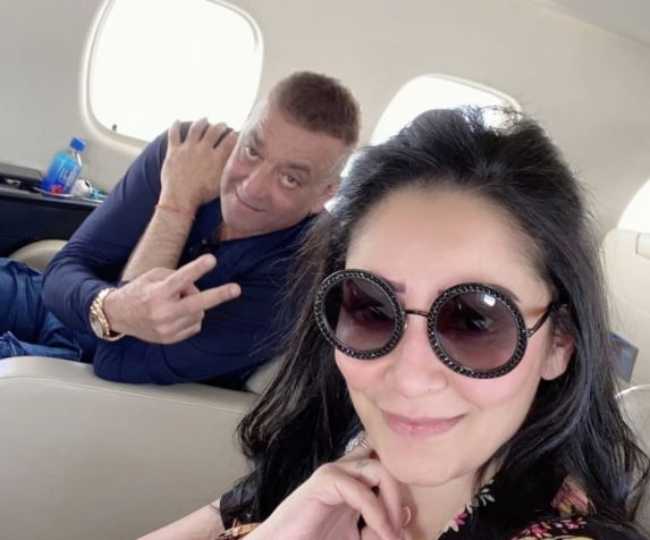 On August 11, Sanjay Dutt announced that he will be taking a break from work due to medical reason as he does not want his health to deteriorate. Taking to Instagram, he wrote, "Hi friends, I'm taking a short break from work for some medical treatment. My family and friends are with me and I urge my well wishers not to worry or unnecessarily speculate. With your love and good wishes, I will be back soon (sic)."

However, when Sanjay Dutt was diagnosed with cancer, wife Maanayata Dutt was in Dubai and she flew down to Mumbai to be with her hubby.

Taking to Instagram, Maanayata shared a photo of Sanjay Dutt and added a caption to it that reads, "Rukk jaana nahin tu kahin haarke....kaanto pe chalke milenge saaye Bahar ke!! We have to fight through some bad days to earn the best days of our lives!! Never quit!! #inspiration #courage #strength #love #grace #positivity #dutts #challenging Yet #beautifullife #thankyougod (sic)."

On the work front, Sanjay Dutt was last seen in Sadak 2 in which he was starred opposite Alia Bhatt and Aditya Roy Kapur. He will be next seen in Netflix original Torbaaz, Yash starrer KGF Chapter 2 and Ajay Devgn's Bhuj: The Pride of India.