Samantha has shared a post to shut her trollers once and for all. She questions double standards for men and women, shares a quote on morals.

New Delhi | Jagran Entertainment Desk: Samantha Prabhu and Naga Chaitanya announced their divorce on 2nd October 2021 and said they both want to pursue their own paths. Ever since they made this news official, the couple has been getting mixed reactions on the split by their fans. While some are wishing them luck for the future others are having a difficult time accepting the news. Among all, there are some who are questioning Samantha's divorce decision.

To shut all the trolls, Samantha on Friday shared an Instagram story slamming all those who showed double standards with men and women and only questioned her.

Samantha wrote ‘Good Morning’ and further share a strong message on morals. It reads, “If matters are constantly morally questionable when done by women, but not even morally questioned when done by men- then we as a society, fundamental have no Morals." the post was attributed to Dr. Farida. 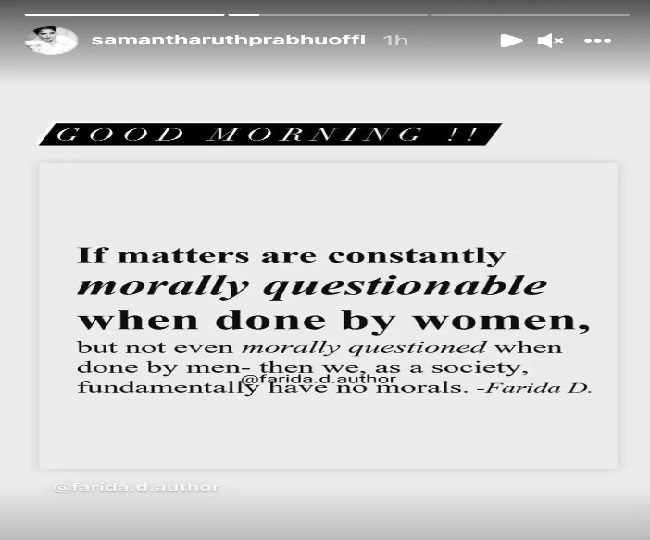 Earlier, while announcing the divorce Samantha and Naga both took their Insta to share a note which stated, "To all our well-wishers. After much deliberation and thought Chay and I have decided to part ways as husband and wife to pursue our own paths. We are fortunate to have a friendship of over a decade that was the very core of our relationship which we believe will always hold a special bond between us. We request our fans, well-wishers, and the media to support us during this difficult time and give us the privacy we need to move on. Thanking you for your support."

The marriage of Samantha and Naga was already in the headlines way before they announced their split. After the official announcement, Nagarjuna Akkineni also shared a post to show support for his son Naga Chaitanya and Samantha Ruth's decision.

On the work front, Samantha was last seen in the web series The Family Man 2, directed by Raj and DK. and Naga Chaitanya's Love STory opposite Sai Pallavi is currently running in cinema halls.