Samantha Ruth Prabhu Shares Pic With Ranveer Singh, Says 'Something Beautiful Is On The Horizon'

Samantha Ruth Prabhu treated her fans with a special photo as she a shared a pic herself and Ranveer Singh on her Instagram. Fans were quick to speculate that the actors are working in a project together.

New Delhi | Jagran Entertainment Desk: Samantha Ruth Prabhu and Ranveer Singh seems likes to be a dream team for fans. And looks like this is happening for real now. On Sunday, Samantha Ruth Prabhu shared a picture with Ranveer Singh on her social media handle and hinted that “something beautiful is on the horizon”. Fans were quick to speculate, that both the actors are teaming up for a project.

While Samantha was seen wearing the uniform of an Air Force officer along with a pair of sunglasses, Ranveer was seen in a blue shirt. Both the actors gave a million-dollar smile to the camera. Taking to Instagram, Samantha dropped the picture on the story section and wrote, “The sweetest ever @ranveersingh.” Ranveer reacted to her post on his Instagram Stories, saying, “'twas a delight @samantharuthprabhu,” and added heart and hug emojis.

Take a look at the picture shared by Samantha Ruth Prabhu here: 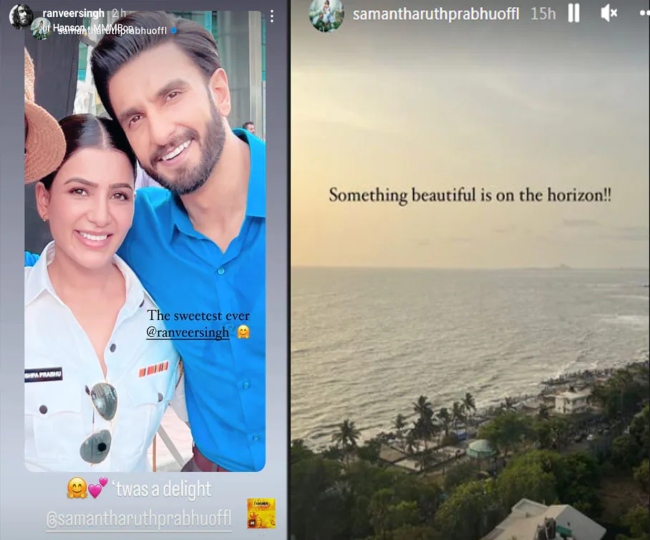 While promoting the film ' Jayeshbhai Jordaar', Ranveer during an interview with India Today said, “I think my favourite song in the recent past is Oo Antava Mava…I go mad when it plays. I don’t really understand (what it’s about), but the music has that, it touches me, it does something to me, so why not.”