Saba Ali Khan shared an Instagram Story where she called out paps for 'Chasing' and 'Torturing' her nephew Jehangir Ali Khan. Scroll down to know what she wrote.

New Delhi | Jagran Entertainment Desk: Actor Saif Ali Khan's sister Saba Ali Khan often keeps fans updated with her family pictures on social media. Especially, she hardly ever fails to post the moments with her nieces Sara and Inaaya and nephews Ibrahim, Taimur and Jeh. Her posts show that how loving and protective she is towards her family's kids.

Recently, another example of her caring attitude was seen when Saba shared a Story on her official Instagram handle featuring Jeh. She posted a video calling out paparazzi for 'chasing' and 'torturing' the little child. Yes, basically the video featured Jeh with his nanny outside actress and Kareena Kapoor Khan's close friend Amrita Arora's house in Mumbai. As soon as his nanny took him out of the car, the camera persons standing there started shouting and calling his nanny for pictures. Later when the little baby was seen in the car they were clicking pictures and flashing cameras on him.

This angered Saba and she captioned her story saying, “Is this what media want? To torture a child?! Chasing? Watch the video. Stop! He's a baby,” 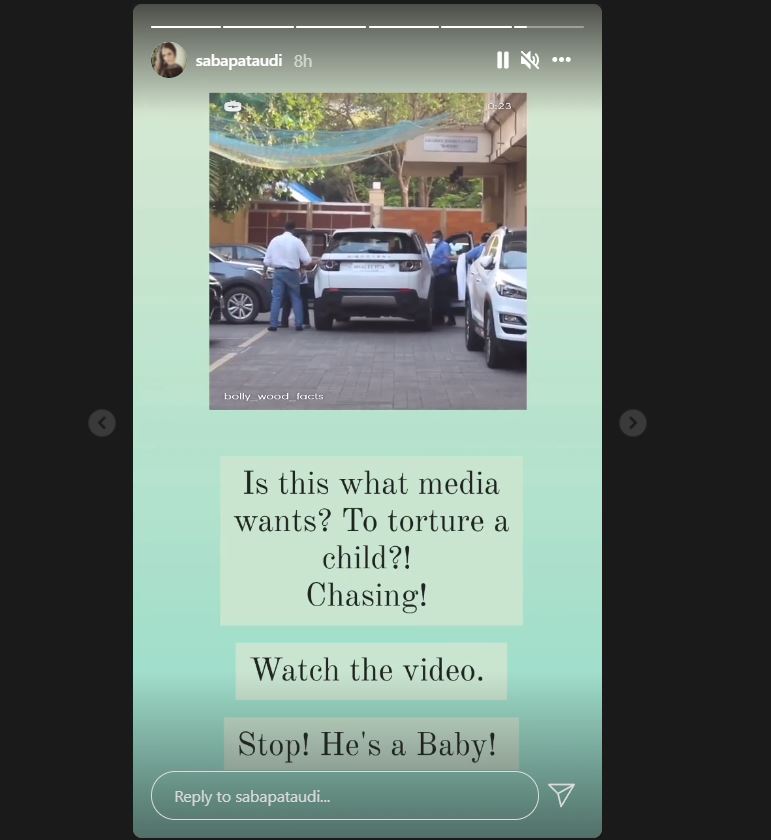 For the unversed, Jeh aka Jehangir Ali Khan is Saif Ali Khan and Kareena Kapoor Khan's second son who was born this year in February. The celebrity couple already has a child named Taimur Ali Khan who is four years old.

Meanwhile, Saif, on the other hand, has two elder kids actress Sara Ali Khan and Ibrahim Ali Khan from his ex-wife and actress Amrita Singh.

So guys, coming back to Saba's concern, what are your thoughts on the same? Do let us know.