Sahdev became an overnight social media sensation after a video of him singing 'Bachpan ka Pyar' went viral. In August 2021, Badshah collaborated with the young boy for the revamped version of the viral song.

New Delhi | Jagran Entertainment Desk: In much relief, 'Bachpan Ka Pyar' fame 10-year-old singer Sahdev Dirdo has regained consciousness and doing better now rapper Badshah shared his health update on Wednesday. Sahdev had met with a major accident on Tuesday after which he was rushed to the hospital in Chattisgarh.

“Sahdev is better now and has regained consciousness. Will go to Raipur to see a good neurosurgeon. Thank you for your prayers,” Badshah posted on his social media handles. 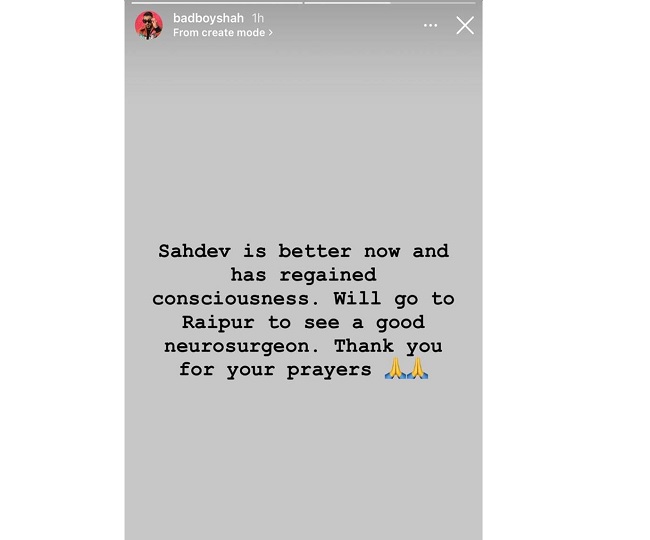 Eversince, the news of his accident came out, Badshah has been in regular contact with the 10-year-old's aids. Earlier, Badshah said Sahdev Dirdo had suffered a head injury and was taken to a hospital.

“Sahdev Dirdo had an accident, injuries on his head, unconscious, on his way to the hospital which is a 100 km away. In touch with his family and friends. I am there for him. Need your prayers,” the rapper shared on his Instagram stories.

Sahdev, who hails from Chattisgarh's Sukma district, met with the accident in Chhatisgarh. It is reported that Sahdev, who suffered a serious head injury, was on his way to his village on a motorcycle with his father when the mishap occurred.

It was reported that Sahdev was not wearing any helmet during the accident which resulted in severe injuries.

According to an official statement obtained by PTI, Chhattisgarh chief minister Bhupesh Baghel instructed Nandanwar to provide the best medical aid at the earliest to Sahdev.

For the unversed, Sahdev became an overnight social media sensation after a video of him singing 'Bachpan ka Pyar' went viral. In August 2021, Badshah collaborated with the young boy for the revamped version of the viral song. He also appeared on Indian Idol 12 as a special guest.