New Delhi | Jagran Entertainment Desk: Kamaal R Khan's DeshDrohi is now a better rated film than Sadak 2. The Mahesh Bhatt's directorial has achieved the dubious distinction of being the lowest rated film on IMDB with a poor 1/10 rating, 0.4 points less than the former.

The Alia Bhatt-starrer has been at the receiving end of the online backlash in the wake of the reignited debate on nepotism and favouritism following the untimely demise of actor Sushant Singh Rajput. The film's trailer and songs, too, fetched millions of dislikes since its launch with the movie's trailer with over 1 crore dislikes.

At least rating-wise, Deshdrohi seems a much better film. The movie was written and produced by KRK in which he featured himself in the lead role. The movie was dubbed as one of the worst movies to have come out of Bollywood.

At that time, the KRK starrer received poor rating of 1.4/10 on IMDB. 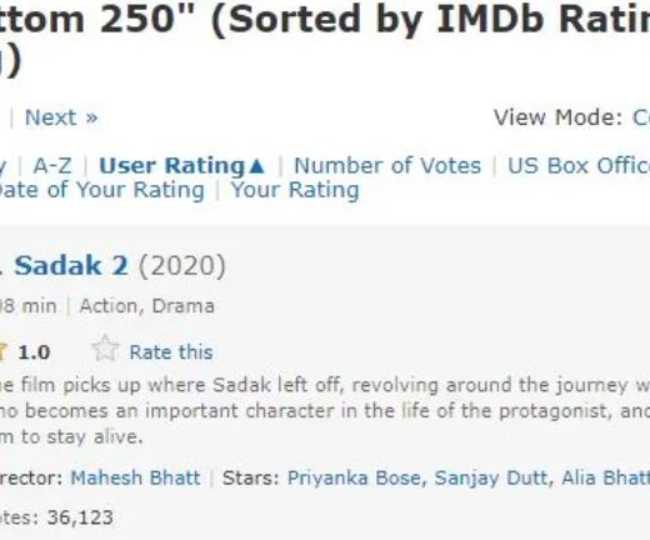 The movie-rating platform’s list of ‘Bottom 250’ is now led by one of the most recent films Sadak 2. The lowest that a person can rate a film on the website is 1, and the highest is 10.

Now there is another comparison as Sushant Singh Rajput's last film Dil Bechara achieved an IMDb score of 8.9 score and also became the most-liked trailer on YouTube.

In Sadak 2, Ravi (Sanjay) has moved on decades ahead, but remains stuck in his life and lifeline; Pooja. Come Aarya (Alia Bhatt), and there is an unrealistically swarm road trip to fight off ‘andhvishwas’ (superstitions), with dreary babas and downwardly exaggerated escapist confrontations.

Sadak 2 is the directorial return of Mahesh Bhatt after two decades, and also his first collaboration with Alia. The film takes forward the story from the 1991 film Sadak, of Sanjay Dutt’s character Ravi, who is seen addressing Pooja, before taking Alia Bhatt and Aditya Roy Kapur’s characters on a journey filled with drama, twist and the fight with fake gurus.