Rhea Chakraborty spotted outside her gym which she used to visit with Sushant Singh Rajput; see pics

Rhea Chakraborty was spotted outside the same gym she used to go with her late boyfriend Sushant Singh Rajput.

New Delhi| Jagran Entertainment Desk: Bollywood actress Rhea Chakraborty who is keeping a low profile ever since her release from Byculla jail in the drugs case related to the death of actor Sushant Singh Rajput. The Jalebi actress was recently spotted along with her brother Showik Chakraborty post her gym session in Khar, Mumbai.

Rhea kicked started the week with some witness mantra, she was seen wearing a simple baby pink top paired with black leggings and left her tresses loose while she was papped stepping out of the gym. Her brother was also spotted wearing simple black tea paired with grey shorts. The 28-year-old actress was spotted outside the same gym she used to go with her late boyfriend Sushant Singh Rajput.

Here have a look at the pics: 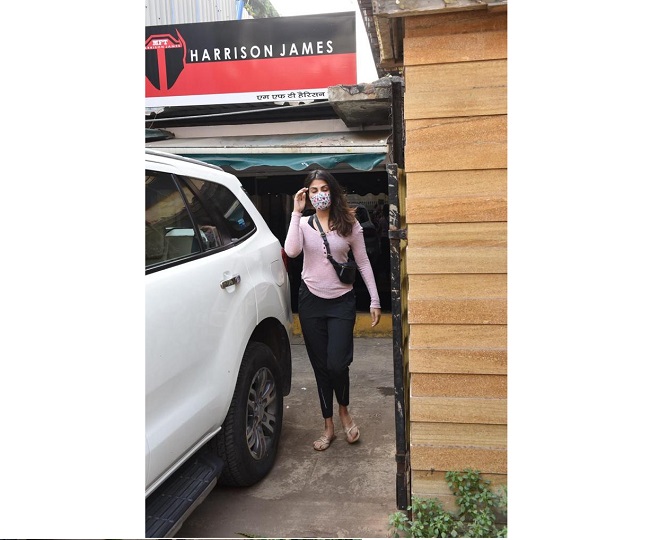 Earlier, Rhea Chakraborty made the headlines when former Roadies fame Raghu Ram posted the pics his and actress posing on social media and captioned it as, "My girl". As soon as he shared the pic netizens rose in uproar and criticised the actress due to this Raghu had to delete the pics. He even issued an apology on his Instagram handle wherein he wrote, "I seem to have created unnecessary trouble with my irresponsible choice of words on a post. Rhea is a dear old friend, and I’m happy to meet her again, and I wish her well."

For unversed, post SSR's death Rhea and her brother Showick were arrested on charges of 'possession, purchase and use' of drugs and were sent to Byculla jail for nearly a month. The actress and her brother are currently out on bail.

Sushant Singh Rajput was found dead on 14 June 2020 at her residence in Bandra, Mumbai. Post SSR's death, his family accused Rhea of abetment to suicide and misappropriation of his funds. the actor's death case is currently being investigated by the CBI, ED and NCB in different angles.