Rhea Chakraborty dismisses rumours of participation in Bigg Boss 15, says 'I'm not a part of this'

Rhea Chakraborty has denied her participation in the TV reality show Bigg Boss. She took her Instagram to post a clarification story. Scroll to know more.

New Delhi | Jagran Entertainment Desk: Bollywood actress Rhea Chakraborty has finally responded to the rumours on her status of participating in the TV reality show Bigg Boss. Rhea has addressed the media and cleared all the speculations once and for all.

Earlier, there were reports that Chehre fame actress Rhea who was in limelight after his boyfriend Shushant Singh Rajput's death has been approached for the reality show and the makers of the show have offered 35 lakh per week.

Rhea took to her Instagram story to dismiss all the rumours as she wrote, “I believe there are some rumours about me being part of TV show Bigg Boss, this is just to clarify that there is no truth to such rumours. I am not a part of Bigg Boss." 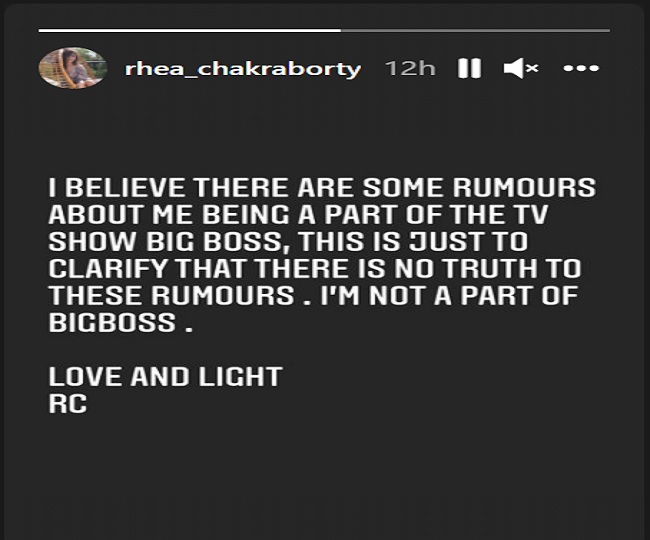 Rhea now only wants to concentrate on web shows and on her Bollywood career. She confirmed that she is not going to participate in the most popular show just before the grand premiere episode of the show on 2nd October.

Meanwhile, Bigg Boss 15 hosted by Salman Khan aired its grand premiere episode on Saturday. In the episode, Salman welcomed many contestants such as Karan Kundrra, Jay Bhanushali, Akasa Singh, Tejasswi Prakash, and others who now have been locked inside the house. The show also showed Ranveer Singh joining Salman on the stage.

Salman will welcome some other contestants in Sunday's episode and as per the media reports Rubina Dilaik, Gauhar Khan and Shweta Tiwari will enter the show as tribe leaders.

Coming back to Rhea, on the work front, Rhea was last seen in the movie Chehre. The movie featured Amitabh Bachchan and Emraan Hashmi as leads.