Rhea Chakraborty Birthday Special: Check out 3 cryptic posts by actress which made netizens talk about her comeback on Instagram

Rhea Chakraborty Birthday Special: Ahead of her 29th birthday, we have brought you some of her cryptic posts about he is coping from the tough times and SSR

New Delhi | Jagran Entertainment Desk: Actress Rhea Chakraborty is celebrating her 29th birthday today, July 1, 2021. Before entering Bollywood in 2013, she started her career as a VJ on MTV India in 2009 and then went on to make her acting debut with the Telugu film Tuneega Tuneega in 2012. In the Hindi cinema, she made her debut alongside actor Saqib Saleem in Mere Dad Ki Maruti, since then, she starred in several films, including Sonali Cable, Dobaara: See Your Evil, Half Girlfriend and Jalebi. Though the actress tried to leave a mark in the industry with her acting, however, more than that she made headlines for her relationship with the late Sushant Singh Rajput and his sudden demise.

The actress was said to be in a live-in relationship with SSR in 2019, but just six days before the actor's death, she moved out for the reasons better known to her. Following his death, the actress was arrested by Narcotics Control Bureau (NCB) over allegations of supplying marijuana to SSR. After spending few days in jail, the actress was given bail on the grounds that "she is not likely to commit any offence while on bail."

Just a few days ahead of Sushant Singh Rajput's first death anniversary, Rhea posted a cryptic post on suffering. Taking to her Instagram handle, she wrote, "From great sufferings, come great strength! You'll just have to trust me on this one...Hang in there...Love Rhea"

The actress took to her Instagram handle and dropped her pic reading Rabindranath Tagore's famous book, Gitanjali. She even captioned the post with one of the quotes penned by legendary poet and wrote, "The question and the cry “oh, where ?” melt into tears of a thousand streams and deluge the world with the flood of the assurance, “I AM!”- Rabindranath Tagore, Gitanjali #keepingthefaith" This post was dedicated to all her fans to keep faith in her.

A week after SSR's death anniversary, the actress took to her social handle and dropped quotes on her Instagram stories, talking about emerging stronger from difficult situations. The first story read, "And just like that... She weathered the storm, for indeed it’s always darkest before the dawn." 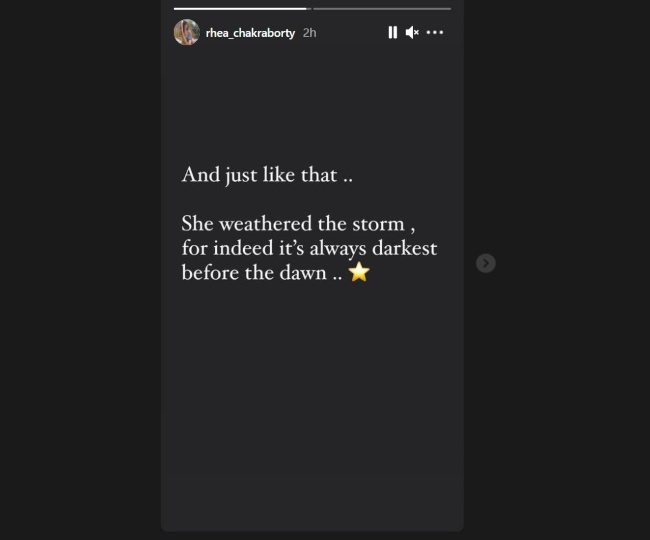 In another Insta story, she talked about how her mother teaching her to walk along with her childhood pic. She wrote, "I thought mom was teaching me to walk. Who knew I would learn to fly." 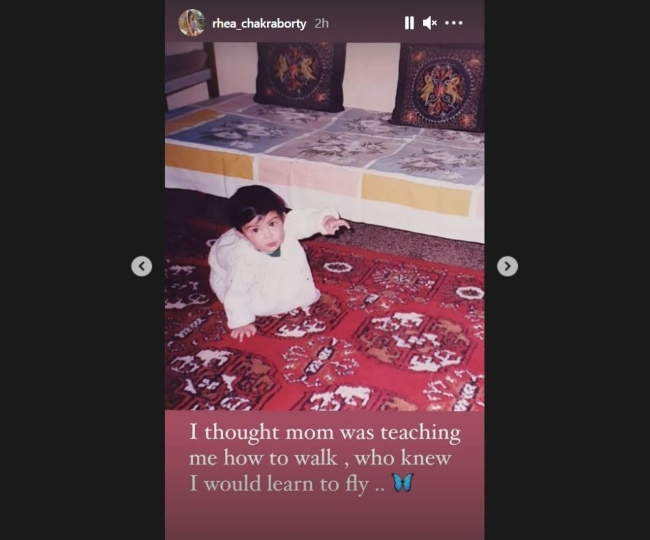 Rhea Chakraborty is trying her level best to stand on her feet amid the investigation in connection with SSR's death. The actress, who was last seen in Jalebi, will be making her come back with the film, Chehre starring Amitabh Bachchan and Emraan Hashmi in lead.