Rekha Birthday Special: Here we are with some of her glamorous ethnic looks that you must try if you are a fan of traditional attire and jewellery. Take a look below:

New Delhi | Jagran Entertainment Desk: Alone with her beauty and grace, she can make any man's pulse racing. However, she is not just the epitome of beauty but also the queen of expressions, who ruled the entertainment industry for over 5 decades. Yes, you guessed it right, we are talking about legendary actress Rekha, who gave numerous hits to the industry and ruled her fans' hearts.

Born as Bhanurekha Ganesan on October 10, 1954, she stepped into the Indian cinema at a young age to support her family and then there was no looking back for the actress. She has starred in over 180 films such as Ghar, Muqaddar Ka Sikandar, Khubsoorat, Umrao Jaan, Khoon Bhari Maang and many more. She is also the recipient of several accolades, including three Filmfare Awards, one National Film Award and was also honoured with Padma Shri.

Apart from films, Rekha hit the headlines for many reasons, including controversies around her personal life. However, out of all, she is adored for her looks and her love for Kanjeevaram sarees. Whether it's an award function or celebrity wedding receptions, Rekha always manages to grab eyeballs with her amazing dressing sense.

So as the actress is celebrating her 67th birthday, here we are with some of her glamorous ethnic looks that you must try if you are a fan of traditional attire and jewellery. Take a look below: 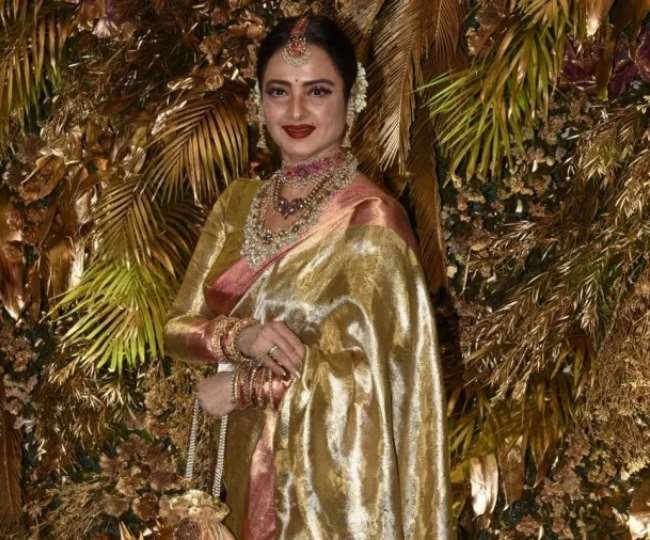 Last year, the gorgeous actress was spotted at Arman Jain's wedding reception, making everyone gasp for breath. The actress was seen adorning a beautiful golden Kanjivaram saree with a pink border. She paired her saree with a matching full-sleeved blouse and accessorised her look with layered guttapusalu necklaces, maang tikka, jhumkaas and bangles. She completed her look with her iconic gajra, and her make-up was on point with red bold lipstick.

In 2019, on the eve of the 20th IIFA Awards, the actress was seen looking breathtaking in bright green and pink Kanjivaram designed by ace designer Manish Malhotra. Rekha paired her saree with a pink full sleeves blouse and accessorised her look with two neckpieces, jhumkaas and bangles. She completed her look with gajra and deep wine red lipstick.

In 2017 at Anushka Sharma and Virat Kohli's wedding reception, Rekha was seen in a pink-orange saree paired with pink brocade elbow-length sleeves. The rosy hues in her saree beautified the look of the saree.

The veteran actress announced to the world that she was the first fashion icon of Bollywood as she made her way at the wedding reception of Sonam Kapoor and Anand Ahuja. The actress was adorning Kanjivaram saree in a Hyderabadi Nizam-era style and accessorised her look with two beautiful necklaces, maang tika and jhumka.