Though Ranveer did not post a caption with the pictures, he dropped a house and evil eye emoji on his post. Take a look at the pictures.

Deepika Padukone and Ranveer Singh recently bought a luxurious house. Now, the couple has finally entered their new home. Ranveer took to social media and shared a bunch of Puja pictures which took place at their new house.

Taking to Instagram stories, Ranveer shared a set of pictures which also featured Deepika Padukone in it. The first picture shows both Ranveer and Deepika are seen in white outfits performing the havan. In front of the actors, the pictures of their ancestors have been kept.

Other pictures show both Ranveer and Deepika holding hands. However, no picture showed their face in it. Another picture also shows both of them opening the gates of their home.

Take a look at the pictures shared by Ranveer here: 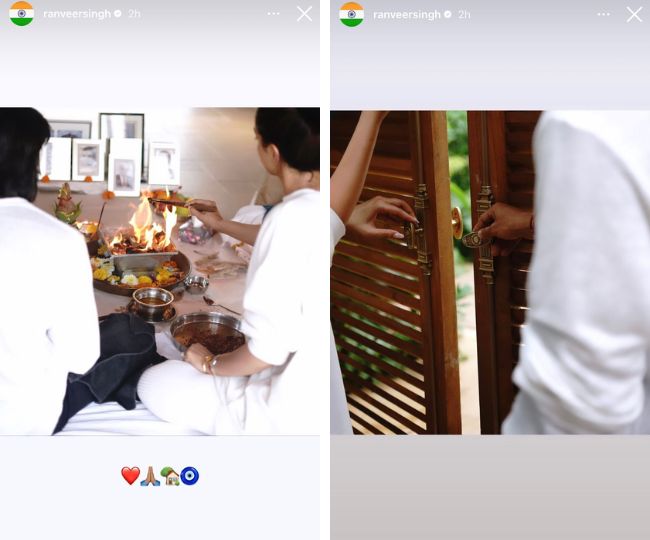 Though Ranveer did not post a caption with the pictures, he dropped a house and evil eye emoji on his post. Earlier, as per media reports, the cost of Ranveer and Deepika's house was Rs 119 crore.

Also Read
Deepika Padukone Hospitalised In Mumbai After She Complained Of..

As per reports in Pinkvilla, the couple has recently purchased a lavish vacation home in Alibaug, which is a beach town close to Mumbai and the couple performed an intimate Griha Pravesh Pooja at their residence in Alibaug. The ceremony was attended by only close family members.

The report further claims that Ranveer, Deepika's Alibaug costs Rs 22 crore. This will be Deepika and Ranveer's second home or more like a holiday home

Currently, the duo is living in a high-rise in Mumbai's Prabhadevi area.

Meanwhile, on the work front Ranveer, the actor was last seen in Jayeshbhai Jordaar. He will be next seen in films including Rocky Aur Rani Ki Prem Kahani, Cirkus, and the Hindi remake of Anniyan. On the other hand, Deepika will be seen in Pathaan, Fighter, The Intern, and Project K.