A poster of Ranbir Kapoor in his look from his upcoming film Shamshera is doing rounds on the internet. Check picture here.

New Delhi | Jagran Entertainment Desk: Ranbir Kapoor is one of the most loved actors in the industry. The actor is adored for his amazing acting skills. Fans of Ranbir are eagerly waiting for his new films to hit the big screens. Recently, a poster, purportedly of Ranbir Kapoor in his look from his upcoming film Shamshera, has been leaked on the internet. In the poster, Ranbir can be seen having a long beard and holding an axe.

As soon as the picture went viral on the internet, several of Ranbir's fans speculated that it was his look from his upcoming film Shamshera. However, there is no clarity on the claim and an official statement is still awaited. Nonetheless, it has got all of Ranbir's fans excited and many have also applauded him for his different look.

Take a look at the poster here: 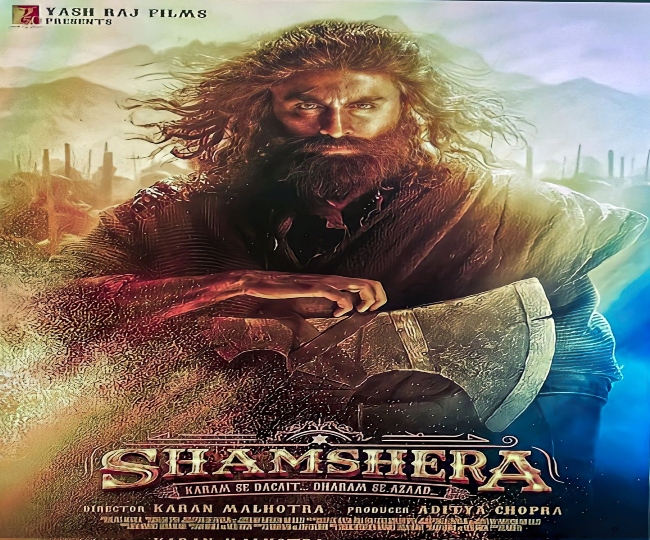 The poster shows Ranbir in a rugged look with long hair and robes. The actor looks completely different from the beard look. He can also be seen holding an axe in his hands. The text at the bottom says Shamshera: Karam se dacait, dharma se azaad (dacoit by profession, free by nature).

For the unversed, these are the exact same lines delivered by Ranbir in the film's official teaser, released in February.

As per reports, Ranbir is likely to play the role of a dacoit in Karan Malhotra's film. However, the Yash Raj Films is yet to make a statement regarding the topic.

The picture was shared by a number of Ranbir’s fan clubs on Twitter and Instagram. As soon as the picture went online, Ranbir's fans spammed the comment section. While one wrote, “Woah, this is mindblowing.” Another said, “Shamshera is gonna be the revival of Bollywood massy films.”

Meanwhile, Ranbir in April tied the knot with Bollywood actress Alia Bhatt in an intimate ceremony. Talking about Ranbir's work front, the actor will be next seen in Animal opposite Pushpa fame Rashmika Mandanna.