Shilpa Shetty's husband and businessman Raj Kundra was arrested on July 19 by Mumbai Police for being allegedly involved in case of p*rn films. And now his old tweets have gone viral. Scroll down to read more.

New Delhi | Jagran Entertainment Desk: Business tycoon and actress Shilpa Shetty's husband Raj Kundra's arrest due to his alleged involvement in a p*rn case shocked everyone to the core. The case was registered with Mumbai Police Crime Branch in February 2021 and the entrepreneur was arrested by the police on July 19.

On his arrest, the Mumbai police have said that they have enough evidence against Raj being involved in the p*rnographic films case. Also, the news agency ANI confirmed the news with its post saying, "Businessman Raj Kundra has been arrested by the Crime Branch in a case relating to the creation of p*rnographic films & publishing them through some apps. He appears to be the key conspirator. We have sufficient evidence regarding this: Mumbai Police Commissioner."

Businessman Raj Kundra has been arrested by the Crime Branch in a case relating to creation of pornographic films & publishing them through some apps. He appears to be the key conspirator. We have sufficient evidence regarding this: Mumbai Police Commissioner pic.twitter.com/LbtBfG4jJc

And now, ever since the news of his arrest broke out, people have found Raj's old tweets which say 'P*rn vs Prostitution' and 'P*rn stars becoming actors'. The tweets have been shared by people online and have gone viral on social media.

In one of his tweets Raj had said, "Ok so here go's P*rn Vs Prostitution. Why is it legal to pay someone for s*x on camera? How is one different to the other?" Meanwhile, in another one, he wrote, "India: Actors are playing cricket, Cricketers are playing politics. Politicians are watching p*rn and P*rn stars are becoming actors...!"

Check out Raj Kundra's old Tweets which are going viral: 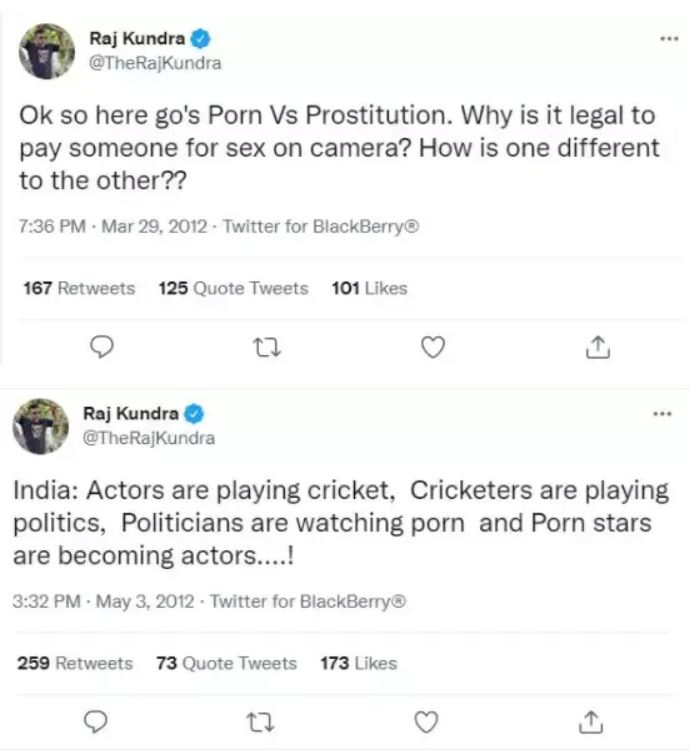 That's not all, netizens have also dug out a throwback video of Raj and Shilpa's guest appearance from 'The Kapil Sharma Show'. In the clip, Raj Kundra can be seen speaking about his income while Kapil narrates the businessman's lifestyle.

In the latest update, Raj Kundra was taken for a medical after being arrested. Meanwhile, his wife Shilpa Shetty and family have maintained their silence so far.

On the work front, Shilpa is awaiting the release of her comeback film 'Hungama 2' starring Paresh Rawal, Rajpal Yadav, Meezaan Jaffrey, Pranita Subhash and more. The film will be released on July 23.