The White Tiger has become the most popular film on Netflix across the world. Priyanka Chopra shared the news on her Instagram story.

New Delhi | Jagran Entertainment Desk: Priyanka Chopra, Rajkummar Rao and Adarsh Gourav starrer The White Tiger recently released on Netflix on January 22. The film helmed by Ramini Bahrani received immense applaud both from the critics and the viewers. Within, just a few days of the release, the film has now become the most popular film on Netflix across the world.

Sharing this happening news, Priyanka Chopra took to her Instagram stories and shared the latest ranking of the most popular films on Netflix. The White Tiger topped the list followed by Outside the Wire and Priyanka's Hollywood film We Can Be Heroes.

38-year-old actress' story read, "So excited to see #TheWhiteTigerNetflix is the no.1 film on Netflix worldwide!! Thank you so much for all the support. Keep watching and let me know what you think." 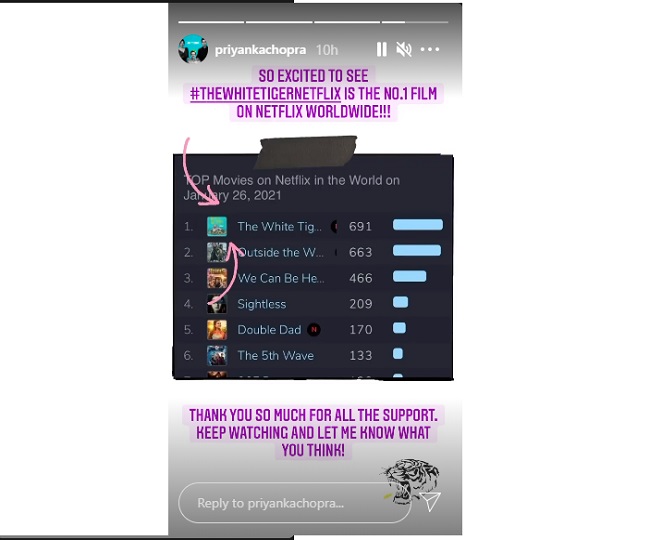 As per reports, Adarsh Gupta who gave a brilliant performance in the film earned a nomination at the Independent Spirit Awards in Best Male Lead category on Tuesday.

Meanwhile, recently, Priyanka Chopra Jonas revealed that she regrets endorsing skin whitening cream earlier in her career. She recalled how she used to feel insecure regarding her complexion after she was treated badly in the film industry.

He further opened up on her first experience in the US and shared that her confidence was shaken after she faced racist bullying when she attended an American high school.

Speaking to Marie-Claire, Priyanka said, “In high school, I feel like the kids who were after me didn’t even understand why. I think it’s that they decided that they were more powerful than someone else..me..and when you pick on someone, it’s because you’re insecure."

On the work front, Priyanka Chopra Jonas will be next seen in Hollywood film Matrix co-starring Keanu Reeves. The actress has also begun shooting for her next film, Citadel with the Russo Brothers. The film also stars Game of Thrones fame Richard Madden.