Priyanka Chopra Shouts Out For 'Ms Marvel', Wishes Farhan Akhtar And Others 'Luck And Love'

'Ms Marvel' is among the most highly anticipated projects in the Marvel Cinematic Universe (MCU). It stars Iman Vellani as Kamala Khan, the titular heroine, a Muslim American adolescent growing up in Jersey City.

New Delhi | Jagran Entertainment Desk: Diva Priyanka Chopra in her latest social media post gave a shout out to 'Ms Marvel' and penned down a note for its team on her, earlier yesterday. Taking to her Instagram story, the 'Bajirao Mastani' actor expressed excitement and applauded the 'Ms Marvel' team, for including and reflecting South Asian actors and culture.

Reposting the trailer of the series, on IG story, Priyanka wrote, "So exciting! I love @msmarvelofficial and am so excited to see it come to life. Wishing my friends and everyone involved so much luck and love #Represntationmatters" and also tagged the cast members of 'Ms Marvel'-Iman Vellani, Farhan Akhtar, Fawad Khan, Aramis Knight, Rish Shah, Zenobia Shroff, Matt Lintz and Yasmeen Fletcher. 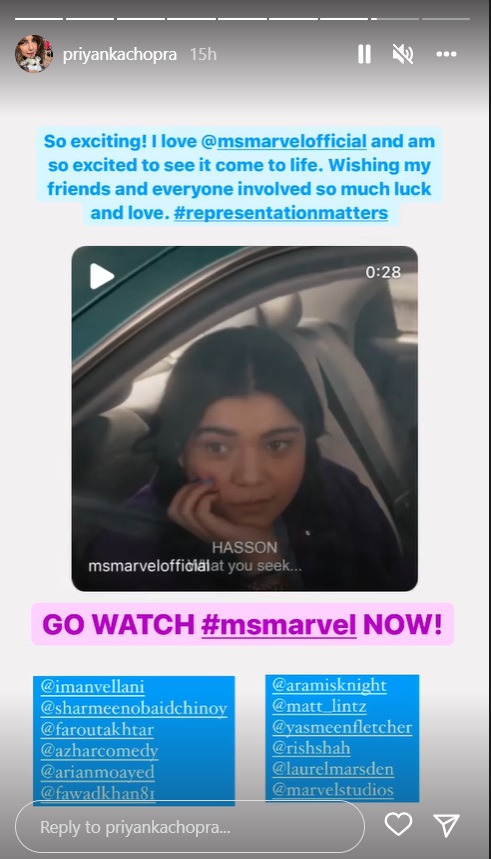 Earlier, Farhan Khan who is marking his MCU debut with Ms Marvel also shared a post and appreciated the creators of the series. Taking to his social media, Farhan wrote, “The post is in appreciation of the creators, the directors and all those in front and behind the camera, who collaborated to make Ms Marvel what it is. It is in appreciation of Sharmeen Obaid-Chinoy for her guidance through my days of working on it."

The post further said, “It is in appreciation of Marvel. I’m proud to be part of their conscious inclusiveness. This show is a celebration of diversity and it certainly will bring joy and pride of self-identity to millions of young girls and boys of the sub-continent. And last but not least, it is in appreciation of the wonderfully talented Iman Vellani. Be prepared to be thoroughly entertained and effortlessly charmed by her. Thank you and good luck, Team Ms Marvel."

'Ms Marvel' is among the most highly anticipated projects in the Marvel Cinematic Universe (MCU). It stars Iman Vellani as Kamala Khan, the titular heroine, a Muslim American adolescent growing up in Jersey City. Kamala is a superhero mega-fan with an enlarged imagination, especially when it comes to Captain Marvel. She is an enthusiastic gamer and a voracious fan-fiction scribe. It is a Marvel Comics-based American television miniseries created by Bisha K. Ali for the Disney+ streaming service.