Priyanka Chopra is all hearts for hubby Nick Jonas, debunks rumours of split after dropping 'Jonas' from surname

New Delhi | Jagran Entertainment Desk: Global actress Priyanka Chopra Jonas is hitting the headlines after she dropped her surnames 'Chopra' and her husband's last name 'Jonas' from her social media accounts on Monday. Ever since then, rumours are rife that the couple is soon going to end their over two-year-long marriage.

Bajirao Mastani actress tied the knot with American singer-songwriter Nick Jonas in December 2018 after dating for several months. Immediately after marriage, the actress changed her name to Priyanka Chopra Jonas on Twitter and Instagram. However, lately, she dropped both her surnames and is going by only 'Priyanka', on Twitter and Instagram, leaving the internet in a state of utter shock. 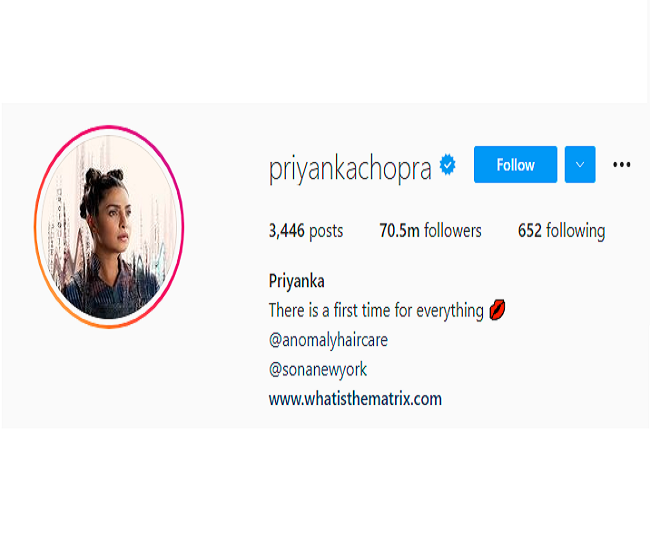 However, putting an end to all the speculations, the actress recently dropped a hearty message on hubby Nick's latest Instagram post. The singer dropped a video wherein he is working out hard in the gym. Commenting on the post, Priyanka wrote, "Damn! I just died in your arms…."

Earlier, Priyanka's mother, Madhu Chopra, also quashed the rumours around Priyanka and Nick's split. Speaking to News18.com, she requested the netizens to not stop spreading the rumours.

Meanwhile, amid rumours, Priyanka dropped a new poster of her character from her upcoming movie, The Matrix Resurrections, starring Keanu Reeves in the lead.

Priyanka and Chopra are one of the most loved couples in the entertainment world. They never fail to give out major couple goals by taking out time for each other despite such a packed schedule. Recently, on Diwali, the couple hosted a bash at their new Los Angeles home. Actress shared a series of pics featuring herself and Nick on Instagram and wrote, "Our first diwali in our first home together. This one will always be special. Thank you everyone who worked so hard to make this evening so special. You’re my angels. To everyone who honoured our home and my culture by not only dressing the part but dancing the night away, you made me feel like I was back home. And to the best husband and partner @nickjonas. You are what dreams are made of. I love you. My heart is so grateful and full. Happy Diwali."