Hina Khan says that the trolling and media trial against Rhea Chakraborty can destroy her career forever.

The controversy surrounding the death of  actor Sushant Singh Rajput is far from over. Sushant's girlfriend Rhea Chakraborty has been at the epicentre of probe by investigative agencies. The Jalebi actress has also been at the receiving end of the social media outrage that erupted after Sushant's death. After South actress Lakshmi Manchu tweeted against the orchestrated hate campaign against Rhea and urged her industry colleagues to refrain from making judgments amidst the ongoing probe, Taapsee Pannu also tweeted and asked people to not overtake judiciary to "convict someone who is yet to be proven guilty".

Bollywood star Taapsee Pannu took to Twitter on Sunday and urged to trust the judiciary and do its work. Re-tweeting a post that spoke about Rhea's interview, Taapsee tweeted, "I didn’t know Sushant on a personal level nor do I know Rhea but what I know is, it only takes to be a human to understand how wrong it is to overtake judiciary to convict someone who isn’t proven guilty. Trust the law of the land for your sanity and the deceased’s sanctity."

I didn’t know Sushant on a personal level nor do I know Rhea but what I know is, it only takes to be a human to understand how wrong it is to overtake judiciary to convict someone who isn’t proven guilty. Trust the law of the land for your sanity and the deceased’s sanctity 🙏 https://t.co/gmd6GVMNjc

Also Read
‘Out of quarantine, but have to follow bio-bubble rules’: Preity Zinta all..
— taapsee pannu (@taapsee) August 30, 2020

Taapsee's tweet garnered a number of reaction and to which Minisha Lamba also came forward to back Rhea, to which of the Twitter user said,"Is she dealing with the loss? Really...lol. The whole PR machinery is active full on." 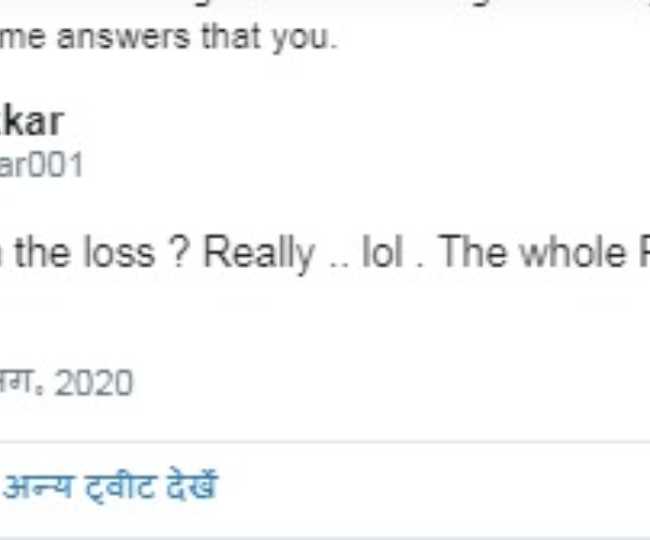 Shame on you, @taapsee

So basically all you care about is earing money even if it means that it will result in million of deaths out of spread of corona? And then hypocrites like @ReallySwara and @taapsee show concern about corona spread and also retweet such hideous requests!

Lakshmi Manchu of Laxmmi Bomb fame also slammed the media for vilifying Rhea. After watching an exclusive televised interview of Rhea, the actor-producer came forward and tweeted, “I watched the complete interview with Rhea Chakraborty and Rajdeep Sardesai. I thought a lot about if I should respond or not. I see so many people so silent because the media has made a monster out of a girl. I don't know the truth and I want to know the truth and I hope the truth will come out in the most honest way. I have complete trust in the judiciary system and all the agencies that are involved in bringing justice to Sushant. But until then can we restrain ourselves from being evil and cruel and lynching a person and her entire family without knowing the facts (sic)."

Hina Khan also expressed her views and while speaking to HT, she said , " We are all fighting for the right cause -- justice for Sushant -- but it doesn’t have to be this way. For the last few weeks, all that every channel talks about is the Sushant Singh Rajput’s death investigation. I am not saying don’t talk about it but have a balanced view. At least, let the CBI investigate and come to a conclusion. You may damage her career forever with accusations. She might not be able to face anyone (sic).”

A few days ago, Swara Bhasker too requested people to let the law decide.

I don’t think even #Kasab was subjected to the kind of witch-hunt on media.. & media trial that #RheaChakrobarty is being subjected to! Shame on Indian Media.. Shame on us for being a toxic voyueristic public consuming this poisonous hysteria.. #RheaDrugChat #SushantSinghRajput