Sharing PM Narendra Modi's 'amazing gesture', Akshay Kumar took to his social media handle and thanked him for his comforting words. He further wrote that his words will stay with him forever.

New Delhi | Jagran Entertainment Desk: Akshay Kumar, who lost his mother, Aruna Bhatia, on September 8, recently, received a heartfelt letter from Prime Minister Narendra Modi, wherein he is paying his condolence to the actor. Sharing his 'amazing gesture', Bell Bottom actor took to his social media handle and thanked the PM for his comforting words. He further wrote that his words will stay with him forever.

On Saturday, PM Narendra Modi sent a letter of condolence to the actor and advised him to preserve her fond memories and keep making her proud. Sharing the letter on Twitter, Akshay wrote, "Humbled by condolence messages on mom’s passing, thankful to all...Grateful to hon’ble PM for this amazing gesture to take out time and express warm feelings for me and my late parents. These comforting words will stay with me forever. Jai Ambe."

PM Modi's letter read, "My dear Akshay, It was best if I would never have written such a letter. In an ideal world, such a time should never have come. I was saddened by the demise of your Mother, Smt. Aruna Bhatia. When I spoke to you that fateful morning, you were crestfallen and you encapsulated it emotionally when you wrote, "She was my core. And today I feel an unbreakable pain at the very core of my existence." 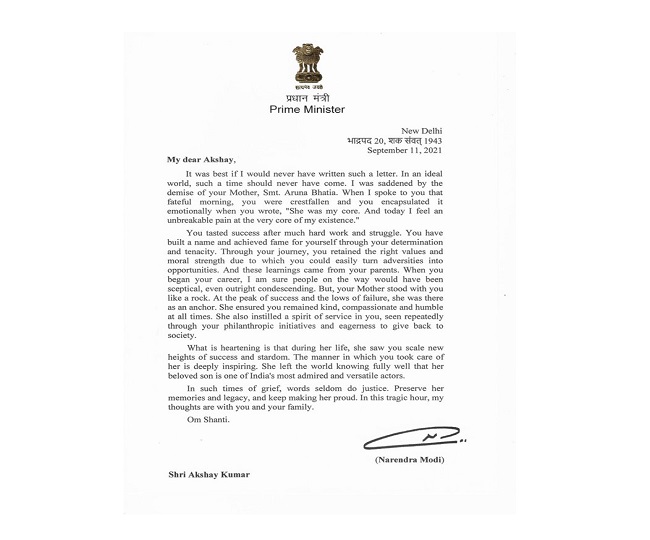 The letter continued, "You tasted success after much hard work and struggle. You have built a name and achieved fame for yourself through your determination and tenacity. Through your journey, you retained the right values and moral strength due to which you could easily turn adversities into opportunities. And these learnings came from your parents. When you began your career, I am sure people on the way would have been sceptical, even outright condescending. But, your Mother stood with you like a rock. At the peak of success and the lows of failure, she was there as an anchor. She ensured you remained kind, compassionate and humble at all times. She also instilled a spirit of service in you, seen repeatedly through your philanthropic initiatives and eagerness to give back to society."

He concluded by saying, "What is heartening is that during her life, she saw you scale new heights of success and stardom. The manner in which you took care of her is deeply inspiring. She left the world knowing fully well that her beloved son is one of India's most admired and versatile actors. In such times of grief, words seldom do justice. Preserve her memories and legacy, and keep making her proud. In this tragic hour, my thoughts are with you and your family. Om Shanti."

Akshay Kumar's mother died due to age-related issues. She was admitted to Hiranandani Hospital, Mumbai, on September 3 and was in a critical state. After performing the last rites, Akshay flew back to London with his family, including his wife Twinkle Khanna and children Aarav and Nitara.