Palak Tiwari is the daughter of Shweta Tiwari and her first husband, Raja Chaudhary and she is all set to make her Bollywood debut with Rosie: The Saffron Chapter.

New Delhi | Jagran Entertainment Desk: Shweta Tiwari's daughter, Palak Tiwari took to her social media to share a reel on her song 'Bijlee Bijlee' by Hardy Sandhu, in which she can be seen posing for different styles of emojisPalak's video has gone viral on the internet as it has been liked by over 60 k people on social media. Sharing the video, Bijlee Bijlee girl wrote, "'Try the Bijli-Bijli Challenge and tag us.'

We can often spot random reels on Instagram in which people are grooving on to the beats of son Bijlee Bijlee, the popularity of the song has made Palak Tiwari an overnight sensation in the industry.

Ever since she posted the video, fans have gone crazy as they have flooded the comment section."You have a very good look and your eyes And the smile is very sweet," commented one user, while another said, 'Gorgeous', another wrote 'Cute Cinderella'. 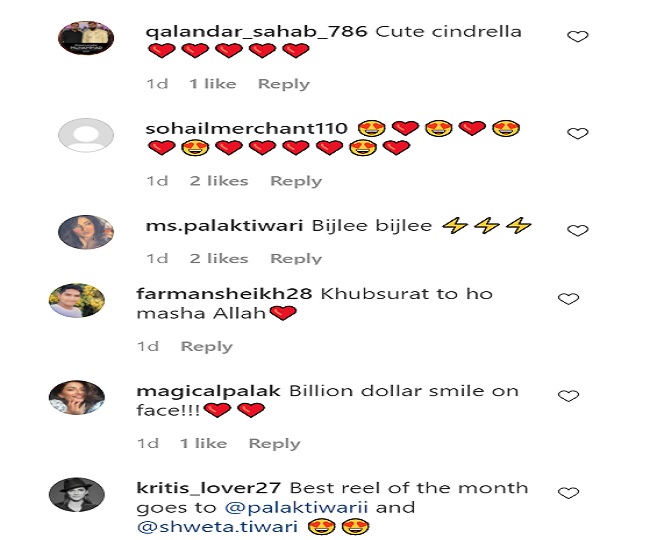 Meanwhile, another fan has written a"billion-dollar smile on face."

Talking about the song, Bijlee Bijlee also features Hardy Sandhu, a popular Punjabi singer and it has been composed by B Praak. #BijleeBijlee challenge is immensely popular on all social media handles.

Earlier, Shweta Tiwari was also seen grooving on to the beats of her daughter's song with Palak herself. Sharing the clip, Shweta captioned it, "Catching the beat with BIJLEE herself #bijleebijlee."

For the unversed, Palak Tiwari is the daughter of Shweta Tiwari and her first husband, Raja Chaudhary and she is all set to make her Bollywood debut with Rosie: The Saffron Chapter.

The movie is directed by Vishal Ranjan Mishra and the story of the movie is based on a real incident in which a call-center employee named Rosie and her sudden disappearance.