Shae Gill who rose to fame earlier this year after being featured on Coke Studio Season 14 song 'Pasoori' in an Instagram post expressed her grief after Moosewala's tragic death but was trolled heavily.

Islamabad | Jagran Entertainment Desk: We have all heard Pasoori, the trending song that is doing rounds on the internet. The song is sung by Pakistani singer Shae Gill, just like her song, Shae is also hitting headlines but for totally different reasons. Shae Gill, a few days ago condoled the death of Punjabi Singer Sidhu Moosewala but received severe criticism for condoling the death of a 'non-Muslim'. She has now hit back at online trolls stating that she hailed from a Christian family and thus can say "prayers for people from different religions."

Shae Gill who rose to fame earlier this year after being featured on Coke Studio Season 14 song 'Pasoori' in an Instagram post expressed her grief after Moosewala's tragic death.

"Heartbroken. May his soul rest in peace and may his family and friends have the strength to bear this loss," Shae Gill wrote.
However, the singer received much criticism for "making dua" for a non-Muslim. 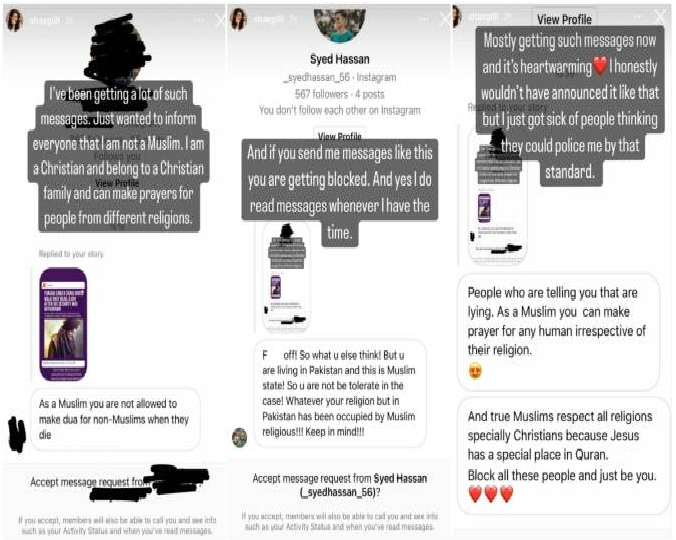 Posting screenshots of some of the replies on her Instagram story, Gill said, "I've been getting a lot of such messages. Just wanted to inform everyone that I am not a Muslim. I am a Christian and belong to a Christian family and can make prayers for people from different religions."

The singer then shared a series of screenshots of people bashing her. "If you send me messages like this, you are getting blocked", she responded and mentioned that she does check her DMs from time to time to keep up with her fans.

The singer started receiving plenty of love and support from her fans following this. She said that most of the messages she was getting now was heart-warming. "I honestly wouldn't have announced it like that but I just got sick of people believing that they could police me by that standard," the Lahore-based singer said on her Instagram.

Shubhdeep Singh Sidhu, popularly known as Sidhu Moosewala was shot dead by unidentified assailants who opened fire at the singer on May 29, near his native village.