Kareena Kapoor says “There will not be a Chautha held for late Mr. Rajiv Kapoor”

The decision has been taken by the Kapoor family members to ensure the safety of people during the ongoing COVID-19 pandemic. Read on to know more.

New Delhi | Jagran Entertainment Desk: Veteran actor and filmmaker Rajiv Kapoor’s sudden death shocked the entire Hindi film industry. As the news of his demise broke out, people from all over started sharing their condolences and many family members and celebs from Bollywood reached at his funeral to pay their last respects.

Now after sharing a throwback picture of her late uncle, Rajiv Kapoor’s nieces Kareena Kapoor Khan and Karisma Kapoor shared an Instagram story informing everyone that there will be no ‘chautha’ ceremony held for him. Both the Kapoor siblings took to their Instagram handle and shared a his photo in their story and and wrote, “Due to the current pandemic circumstances, there will not be a Chautha held for late Mr. Rajiv Kapoor for safety reasons. The entire Raj Kapoor family is a part of your grief too.” 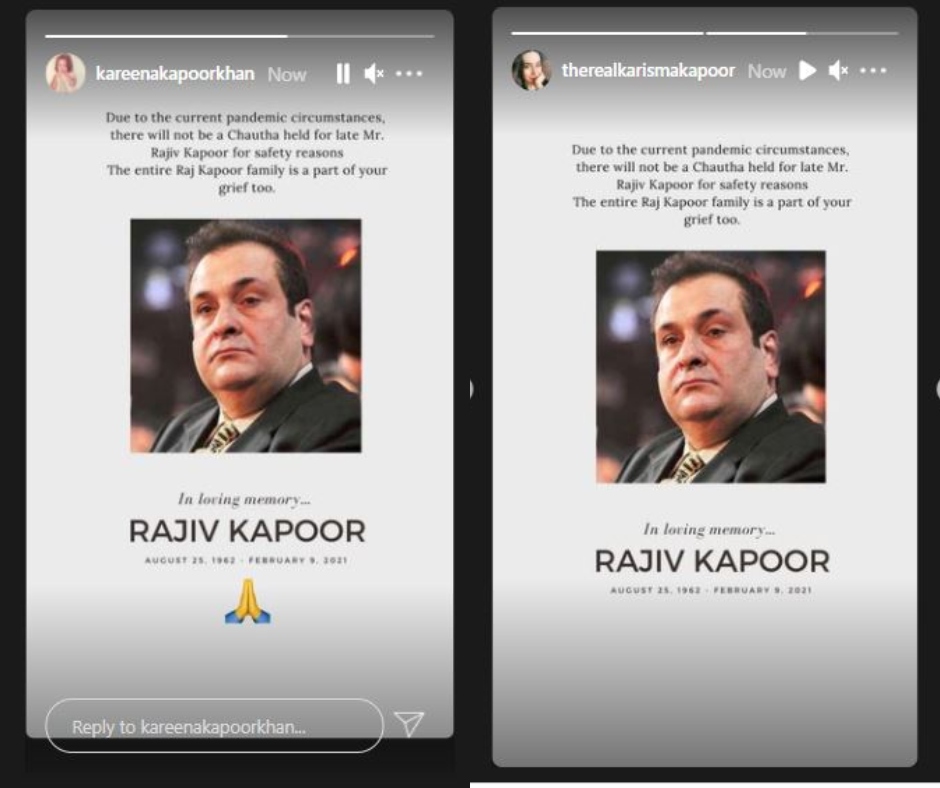 Rajiv’s sister-in-law and late Rishi Kapoor’s wife Neetu Kapoor shared the news of his demise through her Instagram handle. She along with this photo had written, “RIP.”

Rajiv Kapoor had suffered a heart attack and was rushed to Inlak hospital in Mumbai where the doctors declared him dead.

On the work front, the actor-turned-filmmaker rose to fame with 1985’s ‘Ram Teri Ganga Maili’. His last film as a producer was ‘Aa Ab Laut Chalein’ and his last film where he acted will be Ashutosh Gowarikar’s ‘Toolsidas Junior’, which is yet to be released. The film also stars Sanjay Dutt in the key role.

The Kapoors have been facing tragic news like this for a few years, as in 2018, Raj Kapoor’s wife Krishna Raj Kapoor passed away and in 2020, Raj Kapoor's daughter and son Ritu Nanda and Rishi Kapoor succumbed to cancer.