Neha Kakkar rokafied with beau Rohanpreet? Here's what netizens have to say about this viral picture

In the picture, Neha Kakkar and Rohanpreet Singh are sitting hand in hand and smiling for the camera, see photo

New Delhi | Jagran Entertainment Desk: The fans of Neha Kakkar are excited after the news of the singer's wedding with Rohanpreet Singh came into light. The popular Bollywood singer has made no clarification yet regarding the reports stating that they are set to tie the knot on October 24. While everyone is still amazed, a viral photo is doing rounds which claim that their Roka ceremony has already taken place.

In the picture, Neha Kakkar and Rohanpreet Singh are sitting hand in hand and smiling for the camera sitting by the side of the to-be groom's parents.

It is also evident from the picture that Neha is holding some bag of gifts. If you all remember, there is also a picture that is posted by Rohanpreet in which Rohan was seen slipping a ring on Neha's finger and in this photo too, they both are seen in the same outfit.

A TOI report claim that "The wedding is likely to take place in Delhi by the end of this month. It will be low-key due to the pandemic." The two recently met on the set of Neha's song 'Diamond Da Challa' and now their wedding rituals have already begun" 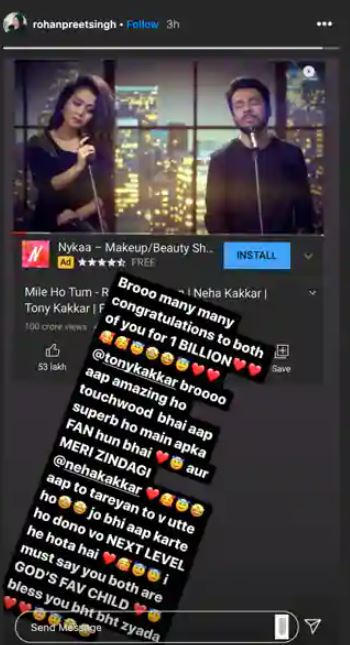 However, Rohan's Instagram story is surely indicating something as he recently posted a video of Neha, while congratulating her for 1 billion views on her song Mile Ho Tum. He showered praises on her and her brother Tony Kakkar for the song and called Neha as "MERI ZINDAGI."