Malaika Arora and Aditi Rao Hydari set the ramp on fire in the national capital for a fashion show. Take a look at the pictures here.

Bollywood's two divas Malaika Arora and Aditi Rao Hydari walked the ramp in Delhi. Needless to say, both the actresses looked drop-dead gorgeous at the event. While Aditi walked the ramp for Anuj Modi on day 4 of the India Couture Week, Malaika turned showstopper for designer duo Rohit Gandhi and Rahul Khanna.

Both the actresses looked absolutely gorgeous in their attires. While Aditi was seen wearing a traditional bride in a lehenga and huge nose ring, Malaika decked up in an embellished sheer gown with a thigh-high slit and deep neckline.

Aditi was seen wearing a Yellow lengha with a green duppta. To make the look more classy, the actress added some traditional jewelry.

Meanwhile, Malaika also shared some pictures while she was getting ready. The actress took to her Instagram and shared the pictures. 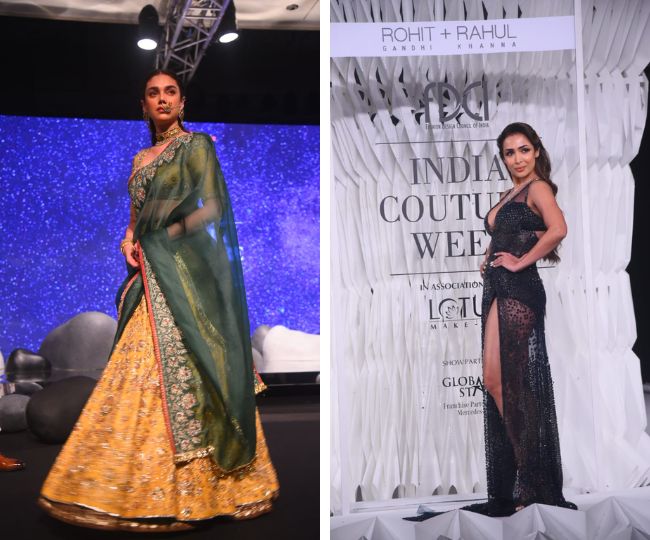 A day before Malaika and Aditi, Pushpa fame Rashmika Mandanna also made her debut at the fashion show. She walked the ramp for Varun Bahl in a red lehenga.

She even shared a video expressing her excitement about doing the debut of her ramp walk.

"1st time in Delhi...1st at the fashion week! I had butterflies in my tummy... I tried to walk like a pro model...It clearly didn't workout. My personality of just smiling and having a great time took over.. but I surely did have a blaaaaaastttt!"

Meanwhile, on the work front of these actresses, Aditi was last seen in the Tamil film Hey Sinamika and is currently shooting for r a Netflix show, reportedly titled Heeramandi.

Malaika, on the other hand, has been a judge on several shows. Earlier, Malaika was seen as a judge on the dance reality show, India's Best Dancer before it came to an end.

Talking about Rashmika, the actress had been shooting in Delhi for the upcoming film Anima. The actress will be working alongside Ranbir Kapoor, Anil Kapoor, and Suresh Oberoi.