The businesswoman managed to hit the 300 million mark despite being inactive on the social media platform for quite some time.

New Delhi | Jagran Entertainment Desk: American model and businesswoman Kylie Jenner has hit a huge milestone as she reached 300 million followers on the photo and video-sharing platform, Instagram. With this, the Kylie Cosmetics founder became the most-followed woman on Instagram, leaving behind pop star Ariana Grande.

The most followed person on Instagram is soccer player, Cristiano Ronaldo with a fan following of 388 million. Instagram's official account takes the top spot with 460 million followers.

The businesswoman managed to hit the 300 million mark despite being inactive on the social media platform for quite some time. Kylie, who is expecting her second child with rapper Travis Scott took some time off from Instagram after the Astroworld tragedy in November.

According to news agency AFP, ten people lost their lives, and dozens were injured at the Astroworld Festival when the crowd started pushing toward the stage as Scott was performing.

On December 25, Kylie uploaded a throwback picture of mother Kris Jenner on Instagram. Since then, Kylie uploaded only two pictures that appear to be from her pregnancy photoshoots.

The first picture is a completed black and white photo, where Kylie can be seen flaunting her baby bump. Sharing the picture, she wrote, “As 2022 is approaching i’ve been reflecting on this last year and the blessings that it brought but also the many heartaches it held. I will never forget this year and all the significant changes it made to my life. I pray this new year is filled with a lot of love for all of you and I hope everyone stays safe and healthy during this time” 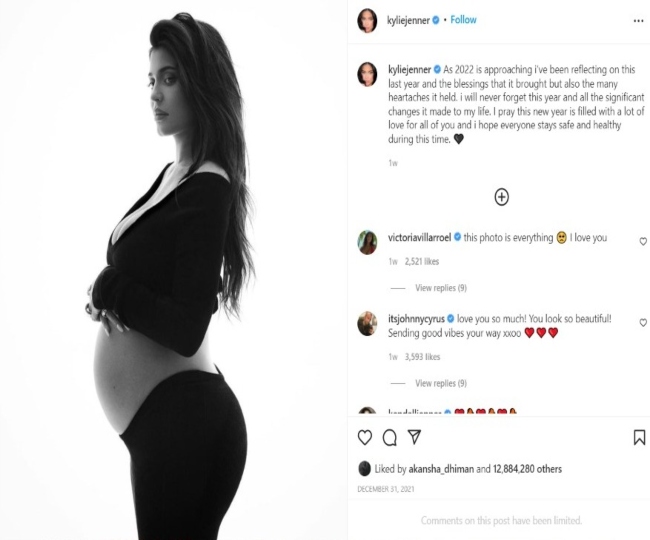 Previously, Kylie held the record for the most-liked picture on Instagram, when she uploaded a picture of her daughter Stormi. The picture garnered over 18.3 million 'likes' since being shared in 2018.