New Delhi | Jagran Entertainment Desk: Couple Ranveer Singh and Deepika Padukone rarely fail to get attention from their fans owing to their on-point PDA. Before getting married the duo kept their relationship underwraps for six years. After tieing the nuptial knot, the duo are expressing each other's love publicly. When not posing together, they keep their mushy comments going on each other pictures. Usually, Ranveer posts quirky messages on Deepika's pictures, but this time it's Deepika who entered into the act.

Ranveer recently posted some pictures to announce his collaboration with music gadgets brand JBL. In one of the pictures he was seen wearing a yellow hoodie with headphone. Deepika couldn't hold herself back from posting on the post, she wrote, "get some for the home now? kuch paise bach jayenge!!!” after which people started sharing several emojis. One of them wrote, "Housewife feels" while others asked what they would do with so much money. 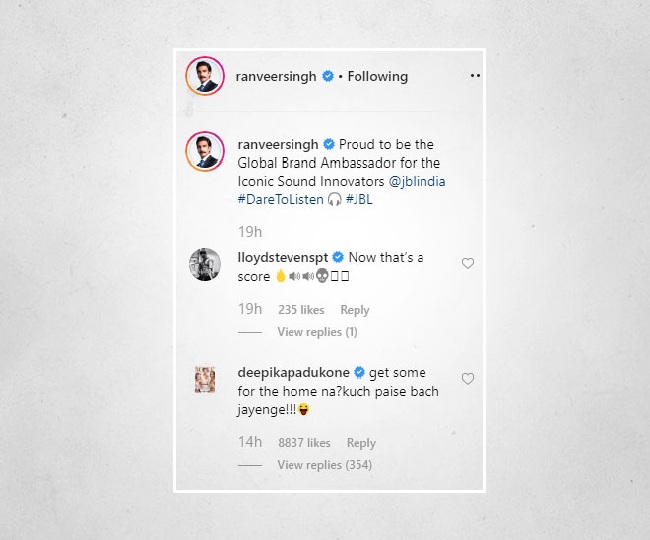 Also Read: ‘I kissed a lot of frogs before meeting my prince’: Taapsee Pannu reveals about her relationship status

In another promotional post, Deepika wrote, "I feel like this is how you’ll tune out when I nag you!”

The duo got married in Italy last year, which was attended by close relatives, family and friends. It followed a high profile wedding reception in Bengaluru and Mumbai.

The duo will next feature in Kabir Khan's 83, which is based on India's World Cup triumph in 1983 in England where they had defeated the favourites West Indies. Ranveer will play the role of Kapil Dev and Deepika will play the role of Roma (Dev's wife). The film is slated to release on April 10, 2020.

Other works of Deepika include Meghna Gulzar's Chhapaak, in which she will be playing the role of acid survivor Laxmi Agarwal.