Kourtney Kardashian Shares Health Update After Stopping IVF, Says 'It's For Many People But Not Me'

Kourtney Kardashian gave an health update to her Instagram fam on Thursday after stopping IVF procedures with Travis Barker.

Kourtney Kardashian on Thursday gave a peek into how she is faring after stopping in vitro fertilisation (IVF) attempts with husband Travis Barker.

Taking to her Instagram story, Kourtney clicked a mirror selfie of herself on a treadmill and wrote, "Finally started getting my energy back 10 months after stopping IVF, for anyone else going through it, it gets better!" 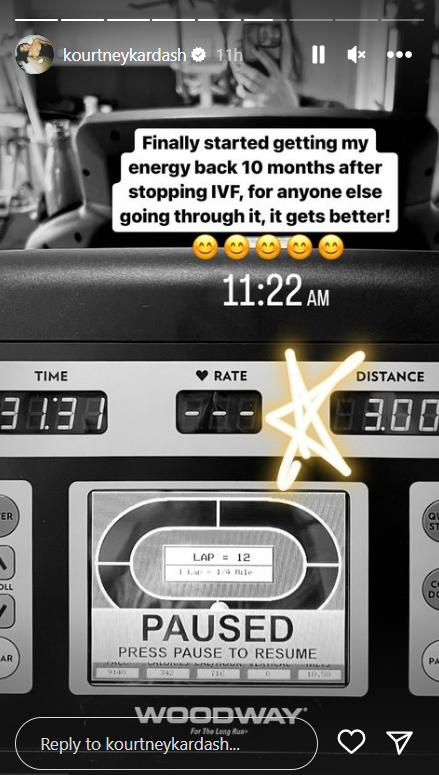 In October, the 43-year-old discussed how the IVF process took a toll on her health, stating that she had undergone a brain scan to know the effects.

"When I went to get the results, the doctor thought it was mostly from IVF because it affects your adrenals, thyroids and hormones," she said on the Not Skinny But Not Fat podcast.

Kourtney, who married Travis in May, said they eventually decided to stop their IVF attempts. Looking back on the procedure, she noted, "It really took a toll on my health and mentally.

"The hormones. The medication. You have to get put to sleep every time. I know it's for so many people but it's just not for me.

"For now, done with IVF. I got to a place where I just felt exactly like how timing is everything with me and Travis. So, I feel like if it's truly meant to be it will happen."

Kourtney and Travis have been very candid in discussing their fertility journey, divulging both the good and the bad. They even let the cameras film portions of the IVF process during the debut season of the Kardashians—an experience that Travis has no qualms about.