Kim Kardashian always manages to grab eyeballs with her dressing sense, whether it's a red carpet event or a day out with kids. However, this time she stole the show at Met Gala 2021 with her quirky and bizarre outfit.

New Delhi | Jagran Entertainment Desk: Since Kareena Kapoor Khan has made his debut on social media, she never misses a chance to stay connected with the world through this platform. The actress is quite an avid user and keeps her fans on their toes by giving them a sneak peek into her personal life. However, this time, the actress has shared her confused state after seeing Kim Kardashian's Met Gala 2021 look.

The reality TV star Kim always manages to grab eyeballs with her dressing sense, whether it's a red carpet event or a day out with kids. However, this time she stole the show at Met Gala 2021 with her quirky and bizarre outfit. The TV star made her appearance on the red carpet in an all-black outfit covered from head to toe. She adorned a t-shirt dress over a curve black bodysuit and tied up her hair in a long ponytail.

After seeing this, Kareena took to her Instagram handle and shared a pic of Kim on her story with a caption, "Kya ho raha hai?” along with a confused emoji. 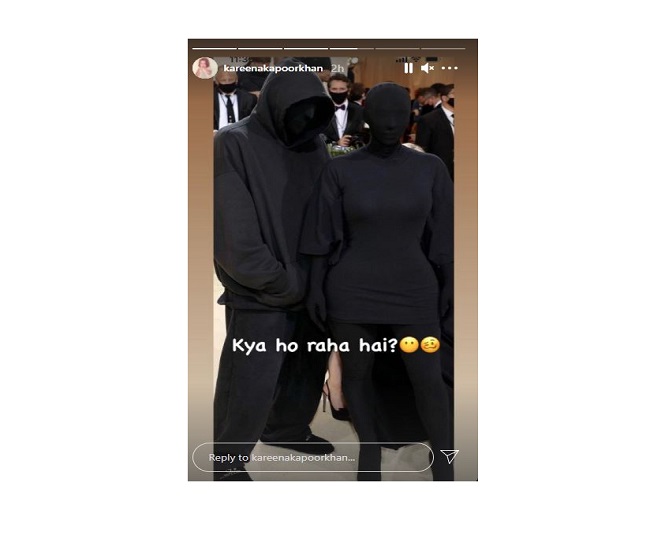 Well, Kareena is not the only one who got confused after seeing Kim's outfit. The social media platforms are also flooded with hilarious messages and memes. One of the users at Twitter wrote, "Im starting to think she has a pimple she wants to hide and this is her 'fashion' way of doing it."

Talking about Met Gala 2021, the red carpet event was scheduled to be held on the first Monday in May last year. However, it got cancelled due to the outbreak of the COVID-19 pandemic. This year, the event was conducted with only 300 guests, and proof of vaccination was required. No Indian celebs were seen gracing the red carpet.

Coming back to Kareena Kapoor, the actress recently returned on the set of Laal Singh Chaddha to complete her last schedule with Aamir Khan. The film is scheduled to release in theatres on the eve of Christmas.