Katrina Kaif who always impresses her fans with her simple yet striking looks, was spotted at Mumbai airport on Tuesday afternoon flaunting a casual outfit.

She donned a blue oversized t-shirt and paired it with ripped jeans. Needless to say, she looked lovely as always.

However, soon after a paparazzi account dropped the video of the actress online, a few social media users began speculating if the actress is pregnant with actor-spouse Vicky Kaushal's firstborn.

"Maybe she's pregnant," one of the comments read. Another social media user wrote, "I saw a post where she looked pregnant and nowadays, she's wearing all loose clothes Bipasha (Basu) too before announcing she was wearing loose clothes."

Even last week, Katrina, while returning to Mumbai after finishing the shoot of her next project, was spotted wearing a beige oversized kurta which she had teamed with an orange dupatta. This again sets tongues wagging. 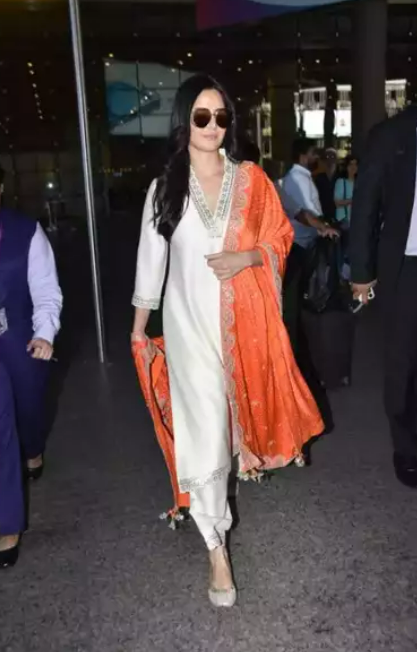 However, the first-time rumours about her pregnancy had started doing the rounds on the internet were in May, when a Bollywood Hungama report had claimed that Katrina-Vicky are expecting their first child together.

Nevertheless, Vicky's representative had denied all such reports in a declaration to News18 Showsha, saying, "This report is false. This is a rumour and has no truth."

Since the Tiger Zinda Hai actress was noticed in loose-fitting clothes, her fans assumed she was pregnant with her first child.

Katrina and Vicky had a private wedding in Rajasthan in December last year. They will celebrate their first wedding anniversary this week.

On the work front, Katrina Kaif was last seen in Gurmmeet Singh's supernatural horror-comedy, Phone Bhoot. The film also starred Ishaan Khatter and Siddhant Chaturvedi in important roles. However, the film received mixed reviews from both the audience and critics.

Katrina will next be seen opposite Salman Khan in the third installment of Tiger 3. Apart from this, she also has Merry Christmas in her line-up opposite Vijay Sethupathi.