Karisma Kapoor shares her thoughts on second marriage, says THIS on fans' query

Here's what Karisma Kapoor has to say about marrying again. She recently announced her upcoming project Brown, directed by Abhinay Deo.

A fan asked Karisma, "Will you marry again?". To this, Karisma replied, "Depends". Take a look at Karisma's Instagram story. 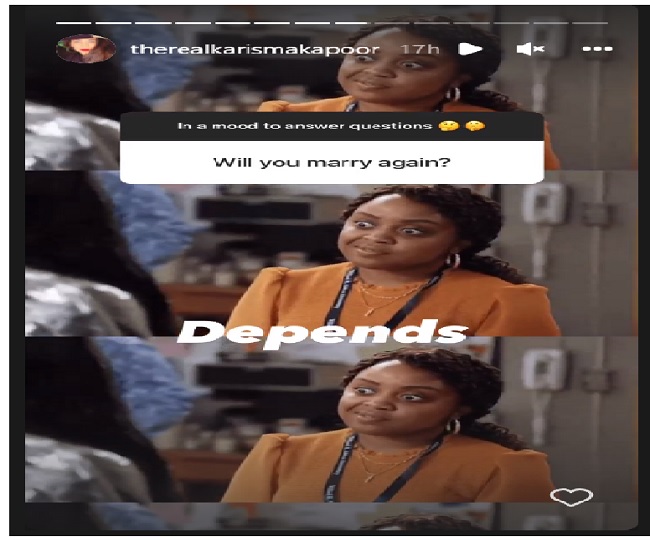 Karima Kapoor was previously married to Sanjay Kapur. They have two children together, Samaira and Kiaan and got divorced in 2016.

In other questions, she was asked about her favourite person. To answer this question, Karisma posted pictures of her children, Kareena, Saif Ali Khan, her parents and Kareena's sons, Taimur and Jeh. She also told her fans that her favourite colour is black by posting a video in a black outfit. When asked to choose between Ranbir and Ranveer, she said 'I love both'. Meanwhile, some fans praised her style and also wished her happiness and success in life.

Also Read
Arjun Kapoor and Malaika Arora to tie the knot in December this year?..

Karisma Kapoor made her debut with the film Prem Qaidi in 1991. She went on to star in some super hit movies like Andaz Apna Apna, Coolie No. 1, Raja Hindustani, Judwaa, Dil To Pagal Hai, Biwi No. 1, Hum Saath-Saath Hain and many more.

On the work front, Karisma Kapoor was last seen in ALT Balaji and Zee5’s web series Mentalhood in 2020. In films, she made a cameo appearance in Shah Rukh Khan's film, Zero. She recently announced her upcoming project Brown, directed by Abhinay Deo under Zee Studios.

PLT IN SECOND = 0.002165147
Jagran English brings you all the latest and breaking news from India and around the world. Get live English news from India, World, Politics, Entertainment, Lifestyle, Business, Education, Sports, Technology, and much more. Follow english.jagran.com to stay updated with the latest English news.
Copyright © 2022 Jagran Prakashan Limited.