Bollywood's Bebo aka Kareena Kapoor is currently having a gala time in London. The Jab We Met actress is currently enjoying her vacation in the UK alone. Kareena is not alone in London as the actress is accompanied by her elder sister Karisma Kapoor. On Friday, Karisma shared a picture with the Bebo. A day before that, cousin Riddhima Kapoor Sahni also shared the picture where Bebo along with Riddhima and Reema Jain can be seen.

Take a look at the picture shared by Karisma here:

As soon as the picture went online, fans bombarded the comment section with fire and love emojis. A lot many celebs are currently vacationing in London, and a few fans reacted to it. While one fan wrote, “Is there a fest in London?” Another one joked, “London airlines giving a discount to Bollywood?"

Back on Thursday, Riddhima Kapoor also shared a picture with cousin Kareena Kapoor. The picture also featured Reema Jain. For the unversed, Riddhima is Rishi Kapoor's elder daughter and sister to Ranbir Kapoor. 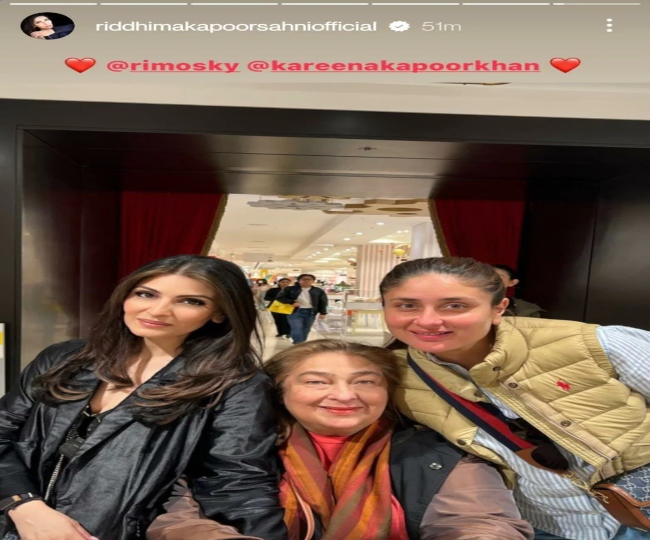 Meanwhile, on Kareena's work front, the actress will be seen in the much-anticipated film 'Laal Singh Chaddha' alongside Aamir Khan. The film is an adaptation of Tom Hanks-starrer Forrest Gump.

Apart from that, the actress will also make her OTT debut with Sujoy Ghosh's adaptation of The Devotion of Suspect X. The series stars Vijay Varma and Jaideep Ahlawat.

On the other hand, Karisma announced her next project, Brown. The actress was last seen in the 2012 film Dangerous Ishq, which was directed by Vikram Bhatt.