Recently, Kareena took to her Instagram stories and gave glimpses of her workout sessions. She shared a stunning picture of herself leaving fans spellbound.

Kareena Kapoor Khan aka Poo of the Bollywood industry leaves no stones to enthrall her fans. The actress is a fitness enthusiast, and her Instagram posts are proof. The actress always makes sure that she conveys the message of healthy and fit life through her posts.

Recently, Kareena took to her Instagram stories and gave glimpses of her workout sessions. She shared a stunning picture of herself leaving fans spellbound.

In the picture, the actress can be seen sitting on her staircase in chic athleisure. Sharing the picture, she wrote in the caption, “Stairway to… (with three heart emojis).”

Take a look at the picture here : 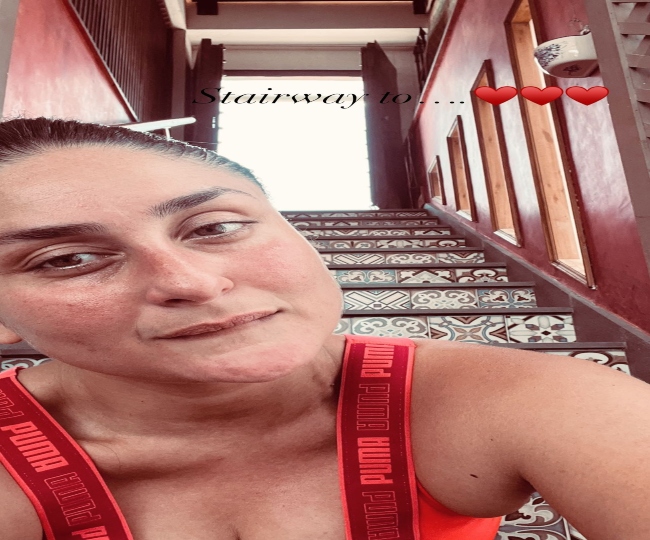 Taking to Instagram, the actress dropped a stunning picture of herself in black attire.

Sharing the picture, the actress wrote, “I like my Koffee black (black heart emoji)”

Apart from that, a bunch of pictures of Kareena and Aamir went viral on social media which appeared to be from the sets of Koffee with Karan.

For the unversed, Kareena and Aamir will be seen in Laal Singh Chaddha together. The film is set to hit the theaters on August 11. The movie will clash at the box office will Akshay Kumar’s Raksha Bandhan.

Apart from Laal Singh Chaddha, the actress will also appear in Karan Johar’s Takht. She is also set to make her OTT debut with Sujoy Ghosh’s The Devotion of Suspect X, which also stars Jaideep Ahlawat and Vijay Varma in the lead.

Kareena is an active social media user and often shares posts and videos on her Instagram account. The actress never forgets to update her fans about her whereabouts.

Kareena recently returned from the Europe trip after having a gala time with her family. The actress shared a bunch of pictures on her Instagram and gave her fans major vacation goals.