Ranveer Singh and Ibrahim Ali Khan were seen together on the sets of Rocky Aur Rani Ki Prem Kahani. Karan Johar shared the BTS video of the film.

New Delhi | Jagran Entertainment Desk: Karan Johar's upcoming film Rocky Aur Rani Ki Prem Kahani has been hitting headlines for the past few months as the release date of the film is also announced. Fans are very excited to see Alia Bhatt and Ranveer Singh on the screen once again. Meanwhile, Karan Johar has been giving updates about the movie as well. He announced that the movie has completed 90 days of the shoot.

Sharing the update, Karan wrote, " Day 91 of #RockyaurRanikipremkhahani". He shared a video on Instagram of behind the scenes of Rocky Aur Rani Ki Prem Kahani. In the video, Ranveer Singh can be seen sitting in the car and Saif Ali Khan's son Ibrahim Ali Khan can also be seen standing near the car. Ibrahim is the assistant director of this film. 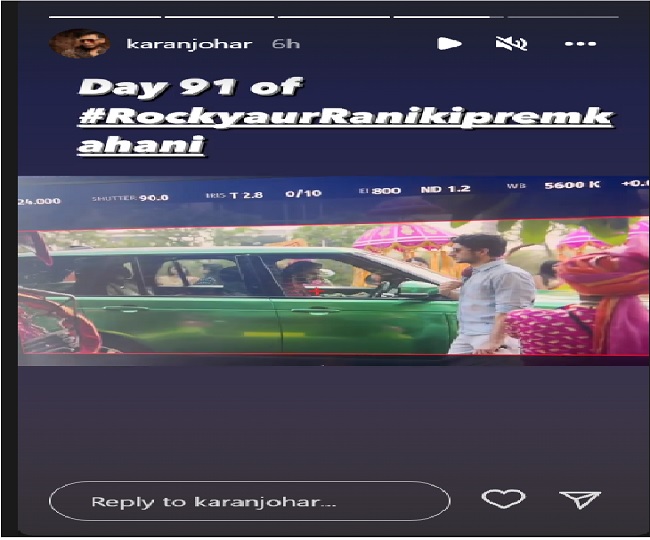 Alia Bhatt and Ranveer Singh will collaborate again for this film after Gully Boy. Moreover, Karan Johar will also make his comeback as a director with this film. He directed the movie Ae Dil Hai Mushkil, starring Ranbir Kapoor, Anushka Sharma and Aishwarya Rai, in 2016.

PLT IN SECOND = 0.002171604
Jagran English brings you all the latest and breaking news from India and around the world. Get live English news from India, World, Politics, Entertainment, Lifestyle, Business, Education, Sports, Technology, and much more. Follow english.jagran.com to stay updated with the latest English news.
Copyright © 2022 Jagran Prakashan Limited.