Kapil Sharma took to his official social media handle to share the video where he can be seen in a car with Bharti Singh. Scroll down to read more.

New Delhi | Jagran Entertainment Desk: Kapil Sharma and Bharti Singh are two comedians who don't just make their fans laugh on TV but on the internet too. Yes, the comedians recently, proved it once again when they sang the viral hit song Bachpan Ka Pyaar in a latest video.

Yes, the video was shared by Kapil on his Instagram story where he and Bharti can be seen singing the song with Bharti Singh sitting in an convertible sports car. In the video, it was also seen that as the duo were singing, a woman who seemed to be their fan, started running away from them before even taking a picture with the two.

As the woman didn't turn back, Bharti said, "Yeh hai jaaneman. Kahaan bhaag rahi ho? Ruko, ruko. Photo toh khichao" which roughly translates into "She is our Jaaneman (who we were referring to in the song). Where are you running off to? Wait, at least click a picture)!"

The comedian captioned the post saying “Fun with fans."

Take a look at the still of their Instagram story video here: 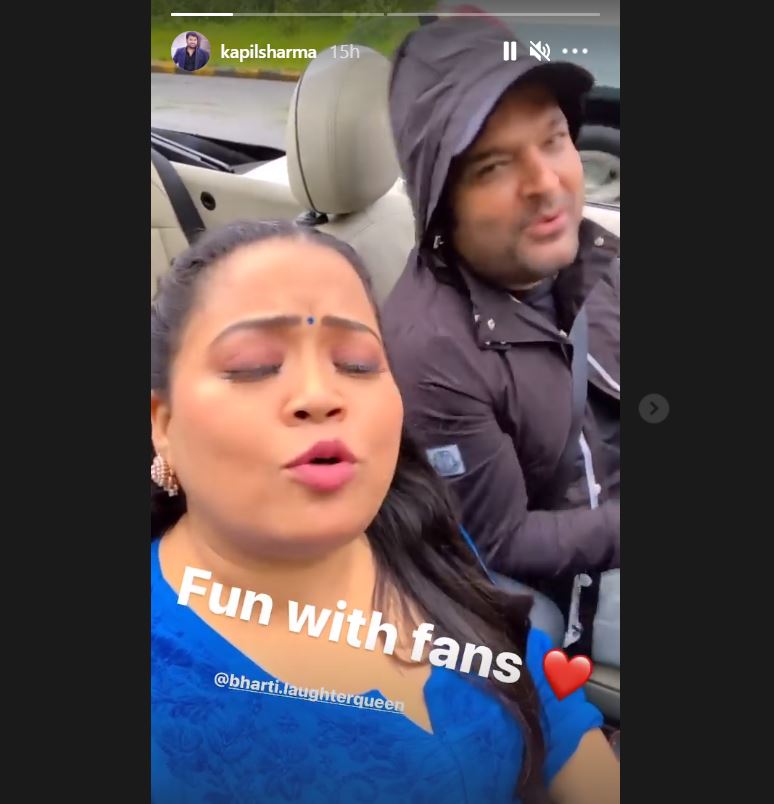 Meanwhile, on the work front, both Kapil and Bharti are all set to feature together once again in the new season of The Kapil Sharma Show. The cast of the comedy show announced their comeback with a promo, which featured, Krushna Abhishek, Kiku Sharda, Sudesh Lehri, Chandan Prabhakar and Archana Puran Singh apart from Kapil and Bharti.

As per reports, the break from the last season of the show was taken due to Kapil was busy after the birth of his son, named Trishaan. The comedian's wife Ginni Chatrath gave birth to their second child this year due to which Kapil had announced taking a little sabbatical from work.

So guys, how excited are you to watch Bharti and Kapil together back on screen? Do let us know.