Kangana Ranaut reacts to Raj Kundra's arrest; says 'This is why I call movie industry a gutter'

Actress-producer Kangana also warned saying she would expose the underbelly of "Bullywood" in her upcoming production "Tiku weds Sheru". Read on to know more

New Delhi | Jagran Entertainment Desk: Raj Kundra's arrest has shocked the entire film industry and while many people are maintaining silence over the issue, actress Kangana Ranaut took to social media to react to the news.

The entrepreneur and Shilpa Shetty's husband was taken into custody on charges of making p*rnographic content and publishing them through mobile applications. Post this, Kangana recently wrote a post and shared it through her Instagram story where she addressed Bollywood as 'gutter' and 'Bullywood'.

The actress-turned-producer also warned saying she would expose the underbelly of "Bullywood" in her upcoming production "Tiku weds Sheru".

Sharing her Insta story, Kangana wrote, "This is why I call movie industry a gutter... all that glitter is not gold, I am going to expose underbelly of Bullywood in my upcoming production called Tiku weds Sheru..." the actress wrote on Instagram story. She further added, "We need strong value system and conscience in the creative industry and of course a whip." 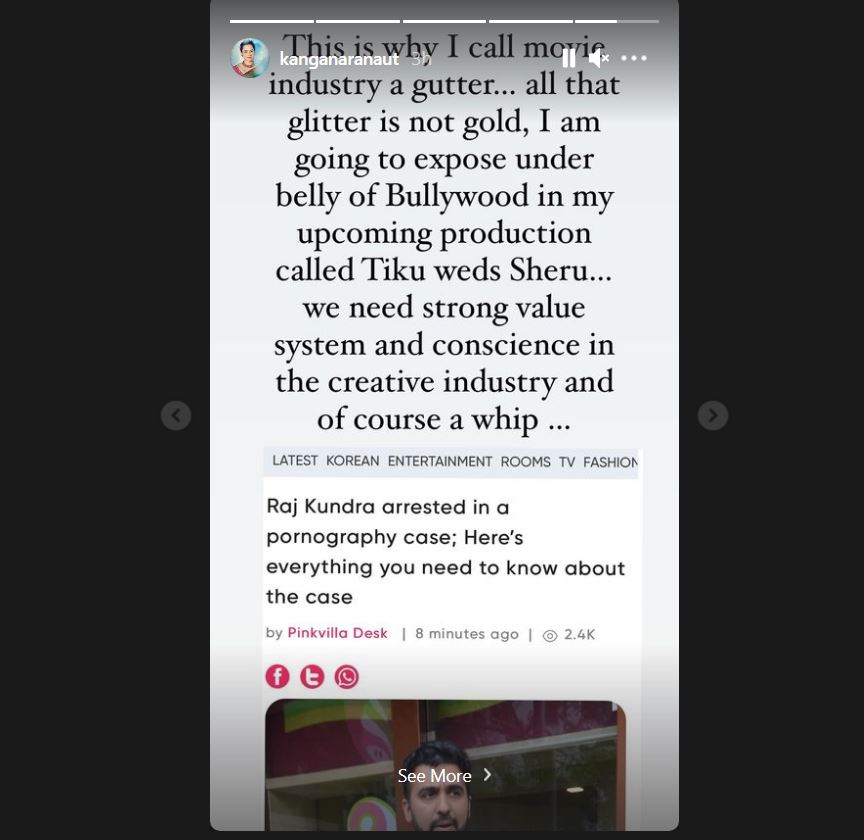 For the unversed, Mumbai Police late on Monday, July 19, arrested actress Shilpa Shetty's husband and businessman Raj Kundra, on charges of making p*rnographic content. The entrepreneur underwent a medical after his arrest and was also earlier produced before a Mumbai magistrate on Tuesday. Now, the news is such that he has been remanded to police custody till July 23.

Also Read
Bigg Boss 15: Not Salman Khan or Sidharth Shukla but THIS celeb to host..

Meanwhile, talking about Shilpa Shetty, on the work front, she is awaiting her comeback film Hungama 2's release which is set to premiere on Disney+ Hotstar on July 23. Apart from the actress, the film also stars Paresh Rawal, Rajpal Yadav, Meezaan Jaffrey, Pranita Subhash and more in the key roles.

Coming back to Kangana Ranaut's reaction on Raj Kundra's arrest, what are your thoughts on the same? Do let us know.