Karan Johar-Produced Shershaah is getting much appreciation ever since its release. Kangana recently took her Insta handle to share praise for the movie

New Delhi | Jagran Entertainment Desk: Who doesn't know the famous war of words between Kangana Ranaut and the ace filmmaker-producer Karan Johar. Every now and then there is something on which these two does not agree. While Kangana Ranaut is very vocal about her thoughts, she often uses her social media to share her views. In a recent Instagram story, Kangana shared a couple of notes on late Captain Vikram Batra and on his recently released biopic Shershaah.

The Instagram story is an appreciation post for the team of Shershaah, mentioning how it is a glorious tribute to late Captain Vikram Batra. Appreciation post.. pretty nice gesture right? But that's not the point here. The movie Shershaah is produced by his nemesis, Karan Johar and she had nothing but good thing to write about him. This is one rare incident, that Kangana has not bashed Karan Johar.

The actor, via her Instagram story congratulated, the team of Shershaah and Sidharth Malhotra, who played the role of late captain in the movie. She wrote, "National hero Vikram Batra was a Himachali boy from Palampur, very popular and loved soldier. When the tragedy happened, news spread like wildfire in Himachal, it slit through our hearts. As a kid, I remember being tormented for day." 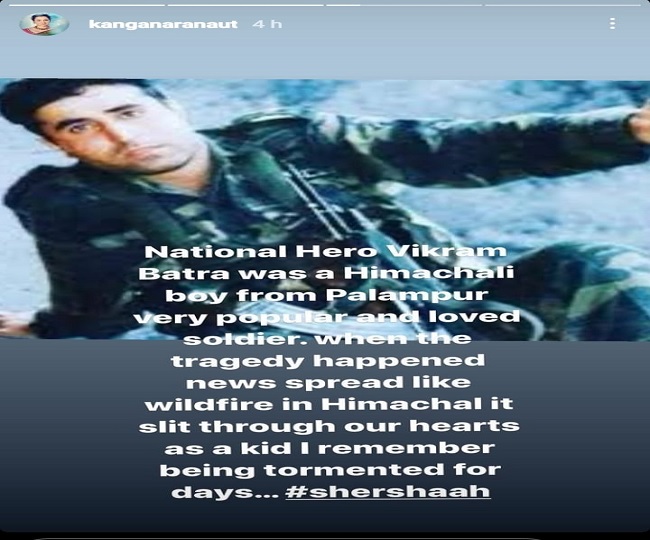 In the next story, Kangana penned down her appreciation for the cast and whole team of Shershaah. She wrote, "What a glorious tribute @sidmalhotra. Congratulations to entire team. It was a big responsibility and you all excelled." 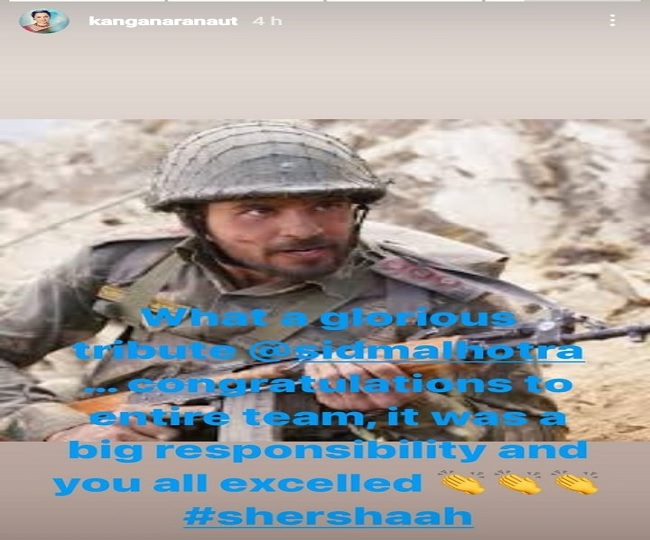 However, the team of Shershaah is yet to respond on this. The response of Shershaah team and above all Karan Johar is much awaited. Shershaah is a biopic based on the life of late Captain Vikram Batra, the film released a while ago and ever since is getting much love and applause from the audience.