'One of the best actors in world': Kangana Ranaut congratulates Nawazuddin Siddiqui for Emmy Awards nomination

Kangana Ranaut took to her social media handle to congratulate Nawazuddin Siddiqui after he got nominated for an International Emmy Award 2021. Scroll down below

New Delhi | Jagran Entertainment Desk: Nawazuddin Siddiqui is one of the prolific actors of Indian cinema. He has given several remarkable performances, out of which, film Serious Men has gained him a nomination at the 2021 International Emmy Award in the Best Actor Category. The film is based on Manu Josep's 2010 novel of the same name. In the film, he essayed a role of an assistant to an astronomer at the National Institute of Fundamental Research. Furious at his situation in life, he passes off his 10-year-old son as a science genius. 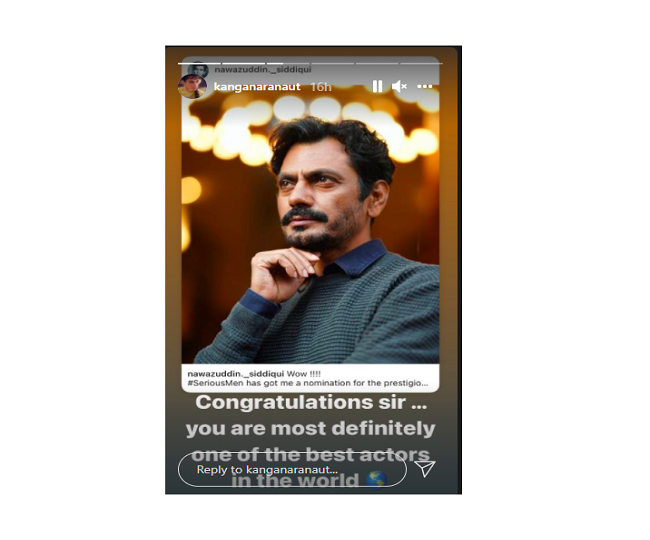 In a statement, he applauded director Sudhir Mishra and thanked OTT platform Netflix for giving them a space to showcase their talent worldwide. He said, "Working with Sudhir and playing the role of Ayyan Mani in Serious Men was a dream come true for me and the International Emmy nomination is validation of all the hard work we poured into the film. I feel honoured to portray meaningful stories that are being recognised globally - which is now a reality thanks to platforms like Netflix."

Coming back to his Emmy Award nomination, the actor is pitted against British star David Tennant (Des) as well as actors Roy Nik of Israel (Normali) and Christian Tappan of Colombia (El Robo del Siglo or The Great Heist) in a Best Actor category.