New Delhi | Jagran Entertainment Desk: Kangana Ranaut is one such actress who wears heart on her sleeves when it comes to expressing herself, and due to this attitude, she is always in the soup of controversies. This time, she has expressed her happiness on Parag Agarwal replacing Jack Dorsey as Twitter CEO. For unversed, Panga actress' Twitter profile was 'permanently suspended' after she tweeted about the post-poll violence in Bengal.

Now, as Jack has stepped down from Twitter's CEO post, Kangana took to her Instagram handle to express her happiness. Taking to Insta story, she wrote, "Bye chacha Jack”. 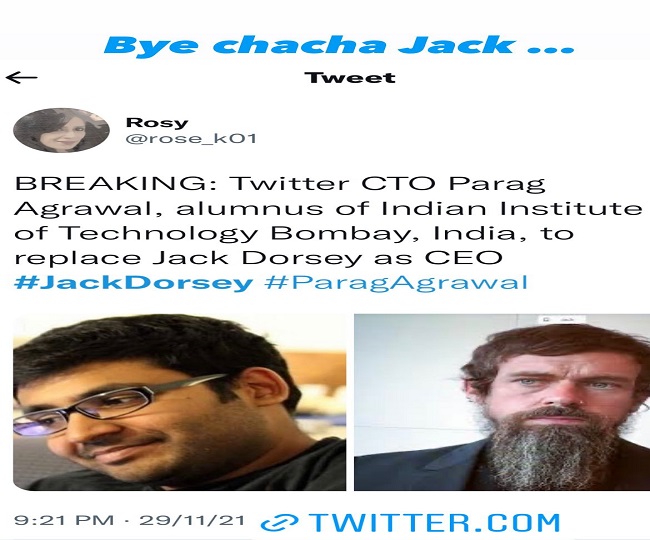 Well, Kangana is not the only celeb who reacted to the news, Anupam Kher also expressed his happiness on Parag replacing Jack. Taking to his Twitter handle, he wrote, "Its our Hindustani brother, Parag Agarwal becoming the new CEO of Twitter! anything can happen !:) @paraga.”

Talking about Jack Dorsey's decision to step down from the post of CEO, he didn't give any specific reason while announcing his resignation on Monday. He took to his Twitter handle and wrote, "After almost 16 years of havinf a role at our company...from founder to CEO to Chair to Exec Chair to interim-CEO to CEO...I decided its finally time for me to leave. I’ve decided to leave Twitter because I believe the company is ready to move on from its founders. My trust in Parag as Twitter’s CEO is deep. His work over the past 10 years has been transformational. I’m deeply grateful for his skill, heart, and soul. It’s his time to lead"

not sure anyone has heard but,

Coming back to Kangana, the actress is riding high on the success of her recent release Thalaivii. Next, she will be seen in Dhaakad and Tejas. Currently, the actress is busy assisting her first film as a Producer, Tiku Weds Sheru.