Kajal Aggarwal is looking gorgeous in a black thigh-high slit body con long dress with cut-out details, while Gautam Kitchlu, on the other hand, twins in black adorning causal t-shirt and matching pants.

New Delhi | Jagran Entertainment Desk: Kajal Aggarwal is hitting the headlines ever since the rumours around her pregnancy sparked. The actress has not said it out loud but keeps on sharing pics flaunting her baby bump. Recently, the actress took to her Instagram stories and shared an alluring pic with her husband, Gautam Kitchlu.

In the image, the actress is looking gorgeous in a black thigh-high slit body con long dress with cut-out details, while Gautam, on the other hand, twins in black adorning causal t-shirt and matching pants. Sharing the image, she added heart and 2022 emoticon. 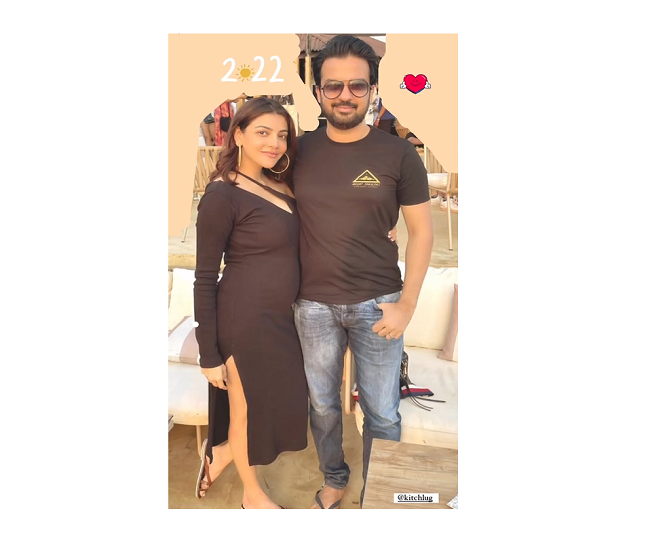 Not long after, she dropped another post featuring Gautam, but this time Kajal's shadow featured in the image. Sharing the image, she wrote a hilarious caption, which read, "Behind every successful man is his….Gorgeous (ahem!) wife , taking pictures!"

The couple got married in a grand wedding ceremony, yet an intimate one on October 30, 2020, in Mumbai. Kajal and Gautam started off as best friends, and after seven years of friendship, they dated for three years before tying the knot.

Meanwhile, on the work front, Kajal is gearing up for the release of her two upcoming films--Acharya and Hey Sinamika. In Acharya, she will be sharing screen space with megastar Chiranjeevi. The film also stars Ram Charan and Pooja Hegde in pivotal roles. The film is all set to release in theatres on February 4, 2022. Next she will be seen in Hey Sinamika, co-starring Dulquer Salmaan and Aditi Rao Hydari. Helmed by Brinda Master, the film will hit theatres on February 25, 2022.

Apart from this, she has two more films that are scheduled to release this year, namely Indian 2 and Paris Paris.