New Delhi | Jagran Entertainment Desk: Bollywood actors, Ranveer Singh and Arjun Kapoor are among the first who completed Anushka Sharma's debut production project-- Paatal Lok, that streamed on Amazon Prime. And without any doubt, the two had to praise this excellent series.

Sharing the poster of Paatal Lok Ranveer Singh wrote in his Instagram story, "Kadak‚ÄĚ and ‚ÄúStraight-up scorcher‚ÄĚ. ‚ÄúUnflinching conviction raised the bar my friends. Congratulations to the stellar team!‚ÄĚ He added. 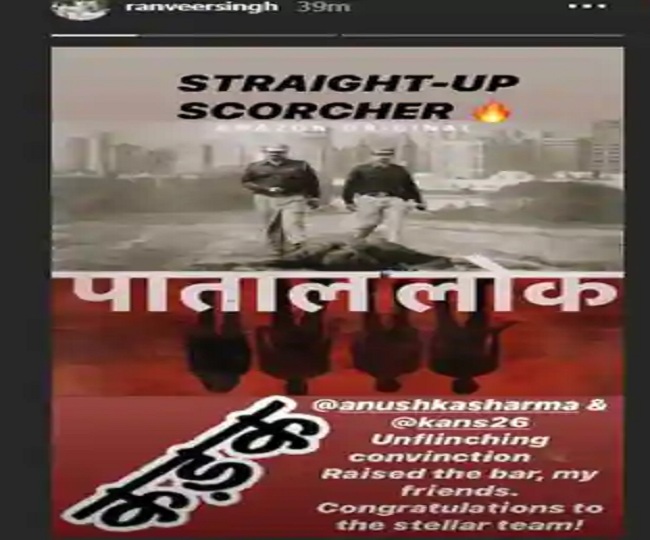 While Panipat actor, Arjun Kapoor could barely control his energy, he said, "Excuse me for my extreme reaction @anushkasharma. But there was no other way I could think of to react to your latest show. #PaatalLok was off the hook. Love it.‚ÄĚ 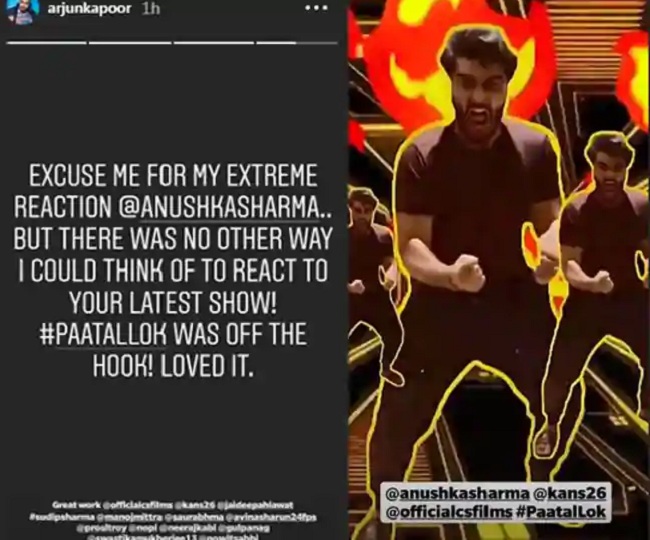 Talking about the success of her production venture, Anushka Sharma thanked her team, and said, "Paatal Lok creator Sudip Sharma has been the captain of the team, leading from the front. It is his brilliance that has captured the underbelly from a lens that‚Äôs unique, inspiring, and discomforting. The directors of the show, Prosit Roy and Avinash Arun Dhaware have starkly and breathtakingly brought alive the rawness of the script on screen and our exceptionally talented cast led by Jaideep Ahlawat, Neeraj Kabi, Abhishek Banerjee and the likes of Swastika Mukherjee, Niharika, Jagjeet, Gul Panag, Ishwak, Asif Basra, among others have poured their hearts out to translate the magic of script to screen.‚ÄĚ

On the work front, Anushka Sharma was last seen in the movie Zero, sharing screens with Katrina Kaif and Sharukh Khan. After that the actress was busy working with her project, turning to an entrepreneur!