The team of Rocky Aur Rani Ki Prem Kahani, starring Ranveer Singh and Alia Bhatt has completed 50 days of shooting. So on that note, Karan Johar has unveiled the release date of the film.

Announcing the release date, Karan shared a video, which is a montage of some behind-the-scenes from the set. The video gives the viewers glimpse of all characters, from Dharmendra and Shabana Azmi's fun to Jaya Bachchan's K3G 'puja ki thaali' to Ali Bhatt and Ranveer Singh's mushy romance scene. The short clipping has all to make the movie buffs excited for the film.

Sharing the video on his Instagram handle, Karan wrote a heartfelt note, which read, "After 7 long years, it gives me such joy and gratitude to be here and announcing that my next #RockyAurRaniKiPremKahani, a love story at its heart with the soul of family values - is releasing on 10th February, 2023. See you in cinemas with an abundance of entertainment that we are getting ready for you!"

Alia also shared the video and wrote, "Loading it up with music, dance, an ensemble cast, a dash of drama and a whole lot of love just for you! #RockyAurRaniKiPremKahani releasing in cinemas on 10th February, 2023! See you there to make this kahani complete.” 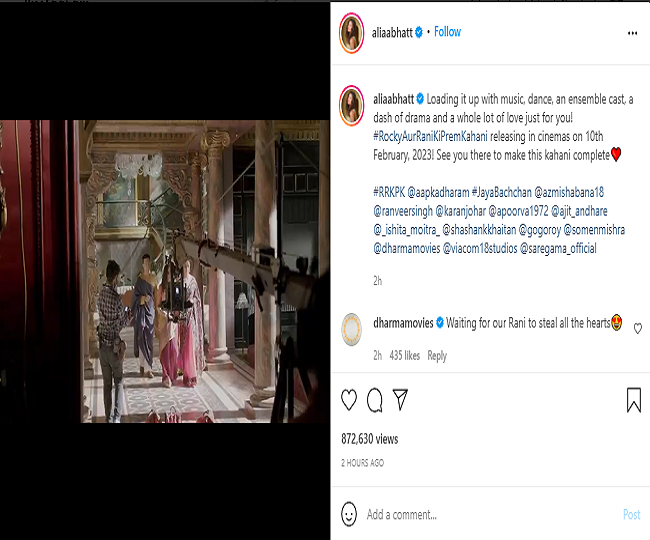 The team of Rocky Aur Rani Ki Prem Kahani has completed 50 days of shooting, and for the past few weeks, they have been shooting in the heart of India, Delhi. Recently, pictures of Ranveer and Alia shootings a dance sequence at the Qutub Minar went viral on all social media platforms.

Also Read
Alia Bhatt Enjoys Her Babymoon With The 'Light Of Her Life' Ranbir Kapoor..

The film marks the return of Karan Johar on the directorial seat after 7 years. He last directed Ranbir Kapoor and Anushka Sharma's Ae Dil Hai Mushkil. Also, it marks Alia And Ranveer's second film together after Gully Boy.