Khushi Kapoor along with Janhvi Kapoor gave massive party goals to their fans are the sisters twinned in white for Akshat Ranjan's birthday.

Jahnvi Kapoor and her younger sister Khushi Kapoor are having a gala time, and how do we know that? The answer is Khushi Kapoor's Instagram stories. The Kapoor sister along with their friends are giving all the fans a major party goal. Khushi took to her social media profile and shared pictures of friends along with her sister Janhvi, where all can be having a chill time together.

Both Janhvi and Khushi were accompanied by Anurag Kashyap's daughter Aaliyah Kashyap and all the gorgeous divas were twinning in the White colour dress. Earlier in the day, Janhvi took to her Instagram account and shared some sizzling pictures in a white dress, besides sharing their party photos.

Janhvi was seen wearing a white bodycon outfit. She kept her in a bun and opted for simple earrings. The actress kept her makeup minimal, however, she chose brown shade lipstick and looked absolutely stunning.

Khushi and Aaliyah also took to their Instagram handles and shared the pictures from the evening. The pictures were from Akshta Ranjan's birthday bash and also feature Janhvi's close friend Orhan Awatramani.

Meanwhile, as soon as Janhvi shared the pictures, fans spammed the comment section with heart and fire emojis.

Sharing the picture, Janhvi wrote, "passionate from miles away, passive with the things u say."

Take a look at here: 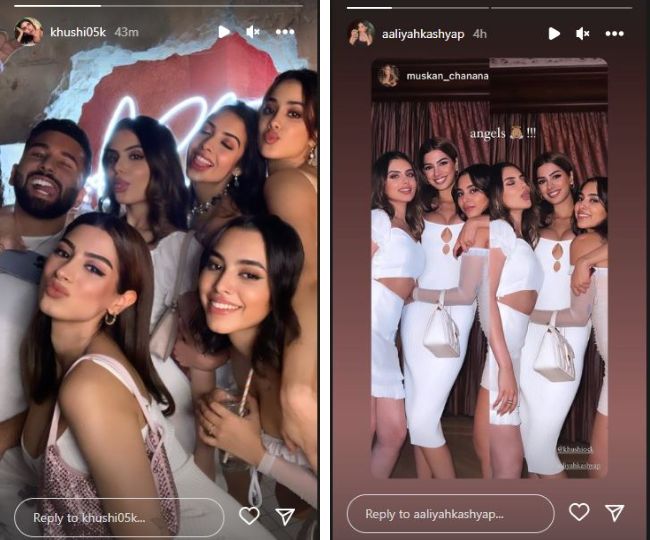 Apart from fans, Mahep Kapoor, Manish Malhotra, and other famous also commented on the picture.

On Janhvi's work front, the actress was recently seen in Good Luck Jerry. The movie also featured Deepak Dobriyal, Jaswant Singh Dalal, Mita Vashisht, and Neeraj Sood among others. The actress has a bunch of projects in her pipeline. Janhvi will be next seen in Bawaal along with Varun Dhawan. The movie will hit the big screens on April 7, 2023.

On the other hand, Khushi will be seen in Zoya Akhtar’s adaptation of The Archies. The movie also features SRK's daughter Suhana Khan and Amitabh Bachchan's grandson, Agastya Nanda. The Archies will release on Netflix.