Is Tiger Shroff, Hrithik Roshan's War 2 In Making? Here's What We Know

War starring Hrithik Roshan and Tiger Shroff was released in 2019 and it was termed a blockbuster by fans. Scroll to know more

Bollywood actor Tiger Shroff who is well known for his stunts and action sequences in his movies on Thursday shared a cryptic post on his Instagram account and now fans are brewing that this post might hint at the sequel to Tiger and Hrithik Roshan's super hit movie War.

Tiger shared a monochromatic collage image of two half faces, the first one is of Tiger himself and the other face is of his 'War' co-actor Hrithik Roshan. Sharing the post, the actor started a poll, in which he asked the fans "Part -2 Anyone?" with two options 'Yes' or 'No' in it? To which approximately 96 per cent of fans voted for Yes.

With this cryptic post, fans are now assuming that the actor just confirmed working on War 2, and they shared their excitement to see the Heropanti actor again in the action avatar alongside Hrithik. However, any official announcement of War 2 is still awaited.

Also Read
'Absolutely No Regrets': Kubbra Sait Talks About Getting Abortion After.. 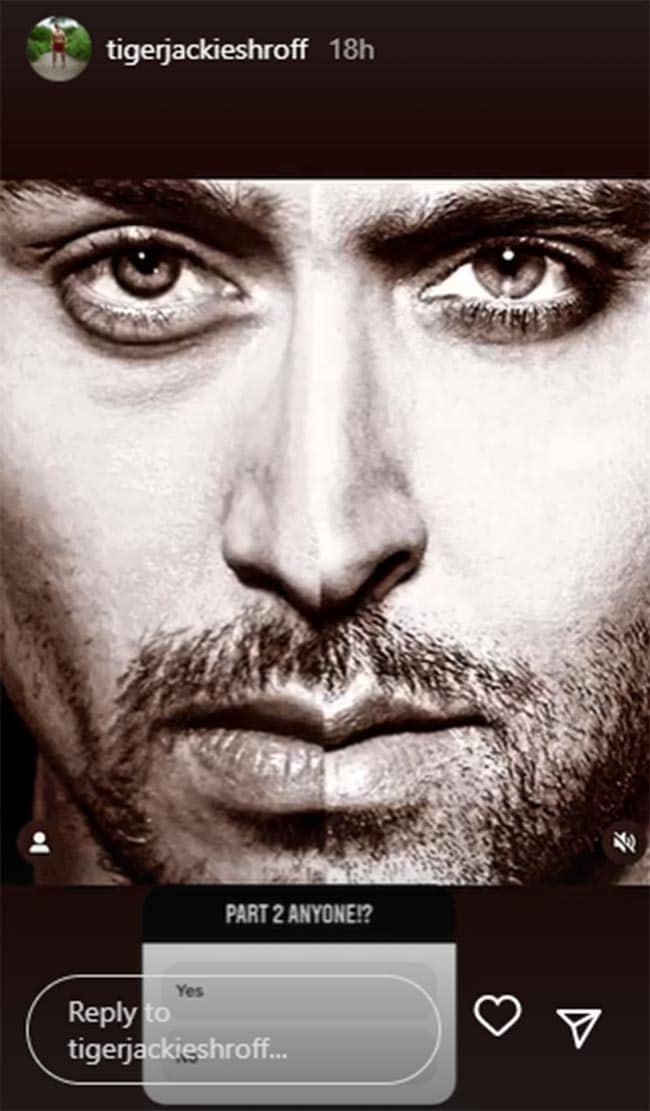 "Did He Just Give A Hint That He's Is In #war2...?? If That It Is Then It Will Be A Blast Again Waiting For Your Next Film Announcement!" a user tweeted.

Another user wrote, "WHAT'SSSSS COOKING TIGER??? Please don't give me hope this soon" As the negative character of Khalid played by Tiger got killed by Kabir played by Hrithik in the film, fans are now speculating their own ideas that how could the duo be part of this franchise again?

"Is it really happening? Khalid's body wasn't found...And Saurabh is a skilled agent...He had enough survival skills to rescue himself from the ceiling incident. Anything can happen. Tiger has chances to come back Let's manifest" a user speculated.

For the unversed, War was released in 2019 and collected over 500 crores at the box office, which was the highest for any film that year, and in the film itself, it was projected that 'War' may turn into a spy franchise.

Meanwhile, Tiger Shroff is currently working on his next film Ganpath - Part 1, directed by Vikas Bahl. The film is slated to release on the occasion of Christmas this year.