'If you can't laugh...': Anushka Sharma reacts on Virat Kohli's interview with Mr Nags in the most adorable way

Anushka shared Virat's video clip with Dansih Sait on Instagram and wrote, "If you cannot laugh at yourself, you may be missing the colossal joke of the century."

New Delhi | Jagran Entertainment Desk: Anushka Sharma and Virat Kohli are an inspirational couple to many people out there. They are one of the most adored and are also a power couple in the Bollywood industry. The duo never leaves any stones unturned when it comes to setting couple goals. Both of them have stood by each other in their thick and thin, and one such recent exam was when Anshuka turned cheerleader for her husband, sharing the video of Virat's latest interview with Danish Sait aka Mr Nags.

During the interview with Danish Sait, Virat opens up about Anshuka's favourite snack to much on that is puffs from a specific bakery in Banglore. Sharing the same video on her Instagram handle, the actress wrote, "If you cannot laugh at yourself, you may be missing the colossal joke of the century."

Take a look at the story here: 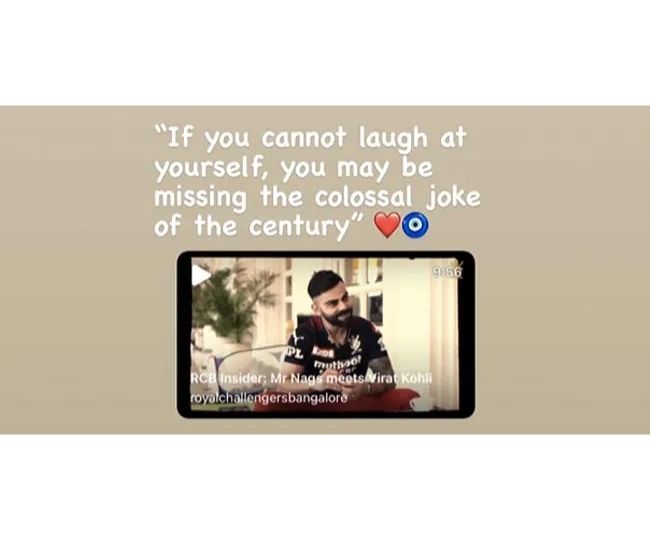 Further in the interview, the cricketer also recalled a sweet incident where he experienced a bit of normalcy. Virat said that he went to Anushka's favourite bakery without having any security beside him to buy her some puffs. Sharing the incident with Danish Sait aka Mr. Nags, Virat said, "I had a mask on and I had a cap on, and it was the best possible way to experience some normalcy, and I promise you nobody noticed me at all, it was such a liberating feeling."

Royal Challengers Banglore also shared Virat's video on their Instagram handle and captioned it "RCB Insider: Mr. Nags meets Virat Kohli. Interview of the year! Catch Virat Kohli in a relaxed, honest, and fun avatar, even as Mr. Nags tries to annoy him just like he’s done over the years."

For the unversed Anushka and Virat tied the knot in a private ceremony back in 2017 and are now blessed with an adorable daughter Vamika.

Meanwhile, on Anushka's work front, the actress is all set to make her return to the silver screens with a sports drama Chakda Xpress.

PLT IN SECOND = 0.003250812
Jagran English brings you all the latest and breaking news from India and around the world. Get live English news from India, World, Politics, Entertainment, Lifestyle, Business, Education, Sports, Technology, and much more. Follow english.jagran.com to stay updated with the latest English news.
Copyright © 2022 Jagran Prakashan Limited.