Hrithik Roshan's fan asks 'you want us to believe u eat samosas'; War actor's reply will win your heart

Every time Hrithik Roshan drops a post on social media, fans go gaga over it and bombards his message section with fun-filled messages. Something similar happened recently

New Delhi | Jagran Entertainment Desk: Bollywood's handsome hunk Hrithik Roshan, popularly known as Greek God, never fails to create a storm on the internet. Every time the 47-year-old actor drops a post on social media, fans go gaga over it and bombards his message section with fun-filled messages. Something similar happened recently when the War actor dropped his picture wherein he is looking into his laptop with a serious look on his face.

Taking to his Instagram handle, Hrithik dropped the post along with the quirky caption that read, "Don’t be fooled by the serious face. It’s a menu. #itakemyfoodveryseriously #missinmysamosas."

As soon as he dropped the post, his fans, including B-town celebs, flooded his comment section with messages. His father, Rakesh Roshan, actor Tiger Shroff and Huma Qureshi dropped laughing emojis. While his Koi...Mil Gaya co-star Preity Zinta wrote, "Mee too" along with a laughing emoji.

Whereas, a fan, who is having a tough time believing that Hrithik eats Samosa, wrote, "You want us to believe u eat samosas". The actor immediately replied to the fan, "Is there anything better?" To this the fan replied, "@hrithikroshan hayeeee no. I don’t know if you get the Chana chatni in India but Lahore has some crazy chatnis to go with that piece of Heaven"

On reading this conversation, it seems Hrithik's fan belongs to Pakistan. Well, there is no doubt that the actor enjoys a great fan base from across the globe. 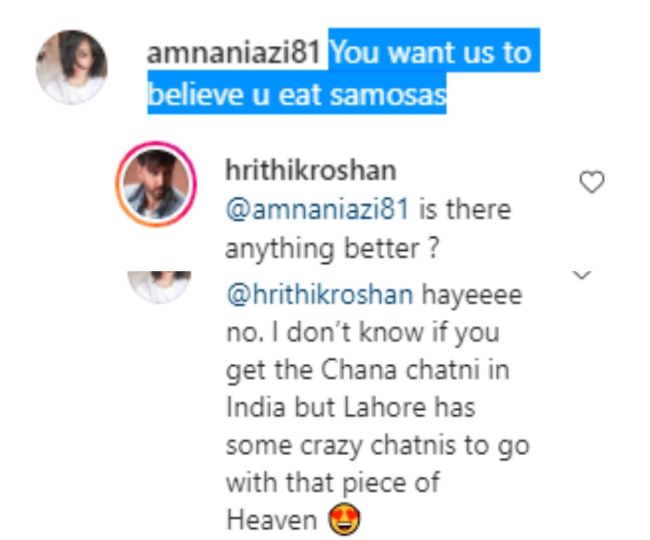 Meanwhile, on the work front, Hrithik was last seen in the action thriller War alongside Tiger Shroff in 2019. After a year gap, the actor has announced his next venture with War director Sidharth Anand Fighter. The film also stars talented actress Deepika Padukone, this will be their first film together.