Here's what Priyanka Chopra has to say about US Presidential Elections

A few days back, Priyanka announced about her upcoming film which is tentatively called 'Text For You'.

New Delhi| Jagran Entertainment desk: Actress Priyanka Chopra is busy watching US Presidential elections as there is a tough fight going on between US President Donald Trump and Democratic rival Joe Biden. While watching the elections, she did not forget to update her fans and posted her thoughts on the election in a series of stories on Instagram.

Taking to Instagram, Priyanka wrote, "The uncertainty of 2020 continues. Watching the US Elections with my family in LA. Many votes still uncounted... it looks like it's going to be a long night."

The voting for US elections has now stopped across the country and now the country's election laws require all votes to be counted - several states routinely take days to wrap up counting legal ballots. 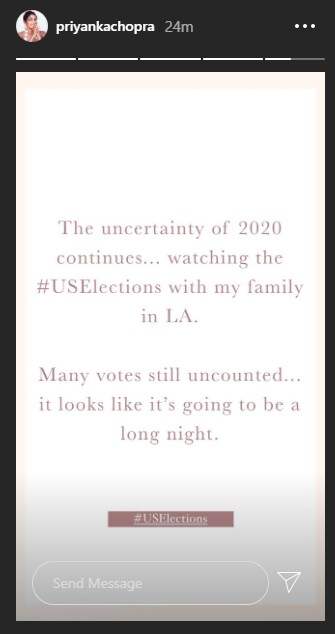 It is reported that this year more votes will be counted than those in the past years as people voted early by mail than in person owing to the pandemic.

The international actress recently returned from her work trip to Berlin, Germany. Just like, Priyanka, many celebrities are urging the fans to step out of their home and to vote. From Beyonce to Taylor Swift and Jennifer Aniston, numerous stars were seen revealing that they have cast their vote to Biden.

Also Read
'Your Rs 50 recharge': Kapil Sharma' reply to troll asking him not to..

A few days back, Priyanka announced about her upcoming film which is tentatively called 'Text For You'. The film is a remake of German-language 2016 movie SMS Fur Dich. The film stars Priyanka Chopra, Celine Dion and Sam Heughan in the lead roles.

On the work front, Priyanka will be seen in The White Tiger, We Can Be Heroes, Russo Brother's Citadel and a film with actress-comedian Mindy Kaling.