Jeremy Renner aka Hawkeye is in India. He has posted some pictures playing cricket with kids and enjoying some Indian food.

New Delhi | Jagran Entertainment Desk: Hollywood actor Jeremy Renner, who is known for his role as the Marvel character Hawkeye, is currently in India. The actor has shared a picture on Instagram in which he can be seen playing cricket with children and he is currently in Alwar, Rajasthan.

Sharing the picture, Jeremy wrote, "What a blessing of life to discover, learn and be inspired by people and places across this planet!".

In the picture, we can see that many people have gathered around to watch Jeremy. He has also shared a picture of Indian food on his Instagram story. He wrote, "Food is so good in India. Different dishes, different regions". 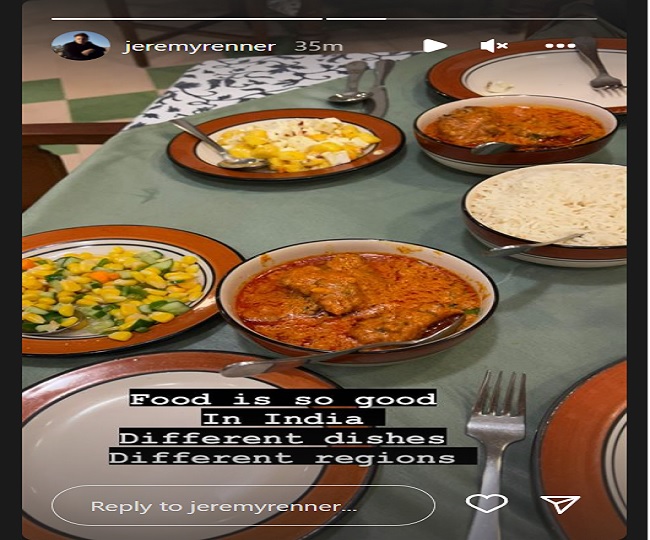 Indian Marvel fans are over the moon as Jeremy is in India. Some people wrote, "Welcome to India Jeremy", meanwhile, another fan wrote, "Hawkeye playing cricket in Alwar, what a treat to watch! Welcome to Rajasthan. Hawkeye!".

Jeremy was in Delhi a few days ago and posted a video. He wrote, "Another avenger added …. Name and superpower please?". In the video, he showed different desserts.

Jeremy was last seen in the Marvel web series Hawkeye, which is streaming on Disney+Hotstar. The series takes place after the events of the film Avengers: Endgame (2019). Jeremy reprises his role as Clint Barton from the film series, with Hailee Steinfeld joining him as Kate Bishop. The series also stars Florence Pugh, Tony Dalton, Fra Fee, Brian d'Arcy James, Vera Farmiga and Alaqua Cox. It is part of Phase Four of the MCU. Other than Hawkeye, he appeared in Marvel movies including The Avengers, Avengers: Age of Ultron, Captain America: Civil War, Avengers: Endgame and Black Widow.