'Godmother': Kangana Ranaut has an adorable wish for Rekha on her birthday

Thalaivii actress Kangana Ranaut managed to sneak out some spare time from her busy schedule to wish her 'Godmother' Rekha on her birthday.

New Delhi | Jagran Entertainment Desk: Kangana Ranaut is riding high on the success of her recent release film Thalaivii. The film is garnering immense love from the audience after it was released on the OTT platform Amazon Prime. However, this has not stopped her from taking a rest and celebrating her film's success, rather she has surrounded herself with more work and aiming to wrap up the shooting of her other films, including Tejas.

However, the actress managed to sneak out some spare time from her busy schedule to wish her 'Godmother' Rekha on her birthday. Yes, taking to her Instagram handle, she dropped a throwback picture on her story and wrote, "Happy birthday to my Godmother dear Rekha ji…Epitome of grace, elegance and beauty.” The picture is from Anushka Sharma and Virat Kohli's wedding reception, wherein both came dressed in Indian attire, saree paired with full sleeves blouse and iconic gajra. 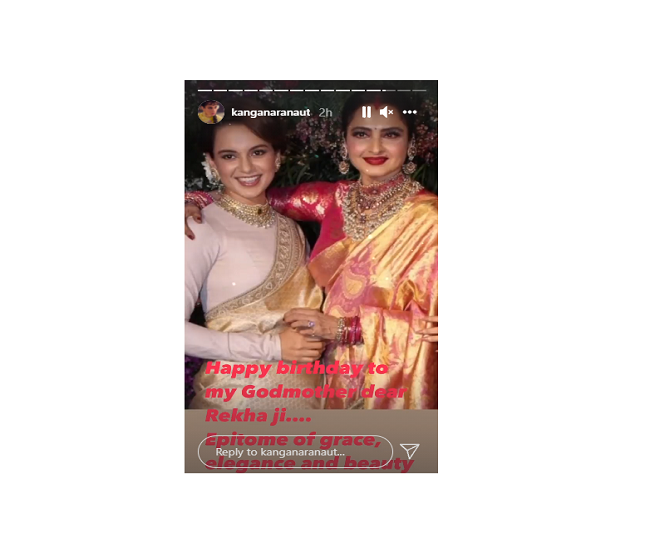 Kangana is not the only one who considered Rekha as a mother even the legendary actress had said that if she had a daughter, it would have been like Kangana. The veteran actress also called her real-life Jhansi ki Rani before the release of Manikarnika: The Queen of Jhansi.

Well, both the actress share a deep bond and never misses a chance to praise each other. Kangana, during an interview with a leading daily once released that Rekha surprised her at 3 am with flowers. She said, "In the night, at 3 o’clock, Rekha ji came to my house with the award and flowers. Isn’t that amazing? Isn’t that the most amazing thing ever? I mean, I was like, ‘What is this?’ Beyond awards, beyond appreciation, beyond hit and flops. That gesture and courtesy of Rekha ji is beyond everything. I was with my friends and was shocked and very impressed that I had been given the award despite my not being there.”

For unversed, legendary actress Rekha is celebrating her 67th birthday today, October 10. The actress is known for giving numerous hits to the industry and is also the trendsetter of her time.