On the premier of The Gray Man, Dhanush ditched the three piece tuxedo and was seen wearing a Veshti. Check picture here

One of the much-anticipated films of Dhanush's The Gray Man' is set to stream on the OTT platform Netflix tomorrow (July 22). The movie will mark Dhanush's Hollywood debut. Ahead of the release, Netflix hosted the premiere in India, and several stars including Vicky Kaushal, Jacqueline Fernandez, and others were present there Dhanush broke all the stereotypes by wearing traditional attire including a Dhoti and Shirt also known as 'Veshti'. The actor ditched the tree piece set and went all in for Indian attire. Apart from Dhanush, the film also stars Hollywood's fame including Chris Evans, Ryan Gosling, Regé-Jean Page, and others.

Dhanush will play the role of Avik San alias Lone Wolf, a deadly assassin in the film.

The official Instagram account shared a bunch of pictures from the event and wrote, "BRB, finding a way to edit ourselves into these pictures with all our faves at the Mumbai premiere of The Gray Man". 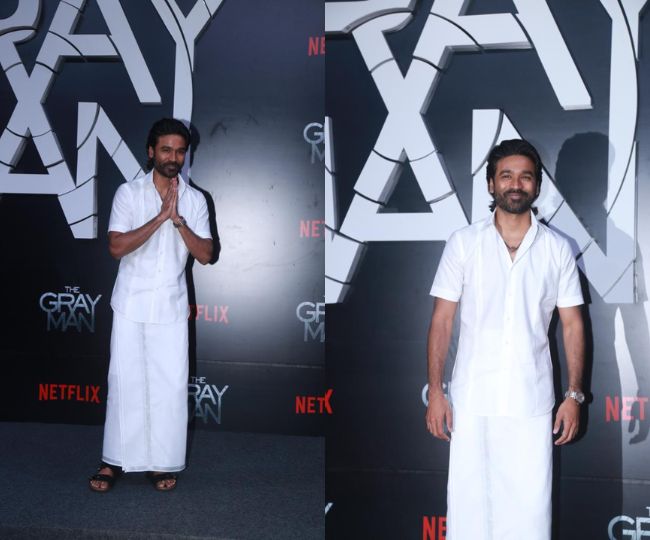 Dhanush won millions of hearts from India because of his attire and the culture it represented. During the event, Dhanush was also seen interacting with Vicky Kaushal.

Though the actor always remained away from the North vs South debate, on the premier he opened up and said he would be happy if people won't address celebs as South actors or North actors.

“The world has shrunk, and the lines at the borders are fading. This is the time to come together and make one big Indian film industry. It will be great if we function together and make movies for everyone and not just South or North audiences. I feel today every film is a national film, and especially with the digital platforms, people have access to watch everybody’s work. It is a great time to be an actor because if you do a good job, you are bound to be noticed by everyone. It doesn’t make sense at this time to refer me or anyone else as South actors," Dhanush was quoted as saying by News18.

About the film ' The Gray Man'

The film is an action-thriller and is based on Mark Greaney's 2009 novel of the same name. The movie will hit the OTT platform on July 22, 2022. The movie also stars Ryan Gosling, Chris Evans, and Regé-Jean Page.