Though Disha Patani was spotted at the airport alone but seeing Tiger Shroff's video, one can say that even he is present in the Maldives with the actress.

New Delhi | Jagran Entertainment Desk: Ahead of New Year 2022, Disha Patani jetted off to the island nation, Maldives, for a quick vacay. On early Monday, the actress was snapped arriving at Mumbai airport alone, and after 24 hours of her arrival, finally, she has dropped a hot pic on her social media handle, giving a sneak peek into her beachy vacation.

Taking to Instagram, the actress showed off her perfect abs and toned body in a maroon printed bikini, posing against the blue sea as the sun rose in the background. She didn't caption the image rather dropped a sunrise emoticon.

In another post on her Insta story, she can be seen enjoying the sunrise and the early morning view of the sea. 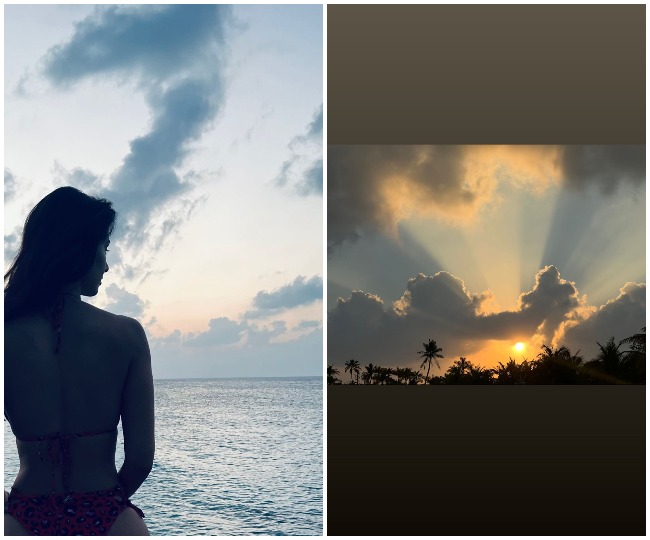 As the fans were wondering who clicked Disha's stunning pic, Tiger Shroff, on the other hand, teased his fans with an oh-so-hot slow-motion video, coming out of the blue sea showing off his abs. He also didn't caption the video rather dropped a fish emoticon.

Though Disha was spotted at the airport alone but seeing Tiger's video, one can say that even he is present in the Maldives. The couple seems to be in a hush-hush relationship for years and is in no mood to officially confirm it.