Mumbai | Jagran Entertainment Desk: Veteran Bollywood actor Dilip Kumar was on Sunday admitted to PD Hinduja Hospital in Mumbai due to breathing issues which he was going through over the past few days, confirmed his wife Saira Banu. The 98-year-old actor is currently under the observation of Dr Jalil Parker.

Now, a new update has been reported by the pulmonologist treating the veteran actor that he has been diagnosed with bilateral pleural effusion. His condition is stable, however, he is currently on oxygen support in ICU.

Earlier, Dilip Kumar's manager informed the actor's fans about his ill health via the veteran actor's Twitter account, which read, "Dilip Sahab has been admitted to non-Covid PD Hinduja Hospital Khar for routine tests and investigations. He’s had episodes of breathlessness." 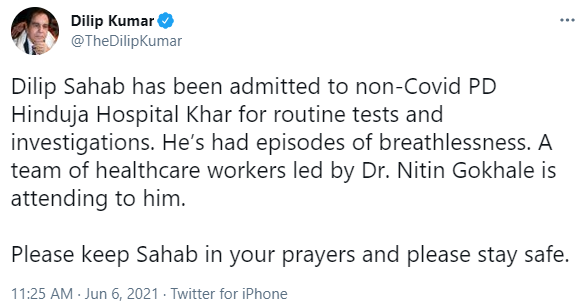 Dilip Kumar, who is often being referred as "The First Khan of Bollywood", was also hospitalised last month for a routine check-up. However, he was released quickly after his test reports were found normal.

Dilip, who lost his two younger brothers -- Aslam Khan (88) and Ehsan Khan (90) -- last year due to COVID-19, has not been keeping well and has often been hospitalised for regular check-ups.

Following the death of his two younger brothers, his wife Saira Banu had announced that Dilip won't celebrate his 98th birthday last December. Banu had also revealed that Dilip's health is deteriorating and she has been taking care of him "out of love and not duress".

"It is out of love and not duress that I look after Dilip saab. I am not looking for praises to be called a devoted wife. Just to touch him and cuddle him is the world’s best thing that’s happening to me. I adore him and he is my breath itself," she told The Times of India in an interview.

Born on December 11, 1922, as Mohammed Yusuf Khan, Dilip Kumar is one of the most famous actors in India, who is credited for bringing the method acting technique in Bollywood.